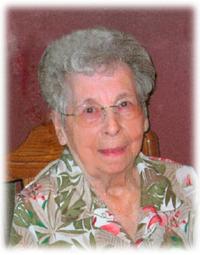 1930 ~ 2013
It is with heavy hearts that the family of Evelyn Maude Metz, beloved wife of the late Jacob (Jack) G. Metz, announce her passing while at the Valleyview Nursing Home on Tuesday, November 26, 2013 at the age of 83 years.  Evelyn was born in Medicine Hat on January 23, 1930 and attended Connaught and Montreal Street Schools.  She married Jack on October 23, 1947, and shared many wonderful years together until his passing on November 23, 2006.  Evelyn was generous and kind to all she knew.  Her caring and loving nature has been easily passed onto the family.  Evelyn’s sense of humor was evident right up to the last hours of her life.  She enjoyed playing cards, especially canasta, baking cinnamon buns,  shopping with Gail, aerobics,   and walking her dog, King.  In her early years she played the banjo along side Jack as he played his guitar.  Evelyn will be forever remembered in the hearts of her daughter, Gail (Gordon) Gee; granddaughter, Kimberly;  grandson, Lee;  great-granddaughter, Jessa and great-grandson, Kajun; brother-in-law, Dave (Ann) Metz, as well as numerous nieces and nephews.  Evelyn was predeceased by her parents;  husband, Jack Metz and son, Kenneth Metz.  Those wishing to pay their respects may do so at Cook Southland Funeral Chapel, 901 – 13 Street S.W., Medicine Hat, one hour prior to the start of the funeral service beginning at 10:00 a.m. on Thursday, November 28, 2013.  The funeral service will begin at 11:00 a.m. with Reverend Barrett Scheske officiating.  Interment will follow at Hillside Cemetery.  (Condolences may be expressed by visiting www.cooksouthland.com)  If friends so desire, memorial tributes may be made directly to the Arthritis Society, 1301 – 8 Street S.W., Suite 300, Calgary, Alberta  T2R 1B7.   Honoured to serve the family is Cook Southland Funeral Chapel, 901 – 13 Street S.W., Medicine Hat, Alberta  T1A 4V4  Phone 403-527-6455.

No Condolences for “EVELYN METZ”