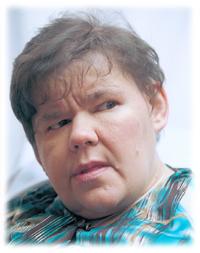 1953 ~ 2013
Catherine Lee Hedberg passed away while in the loving care of her Alfred Egan Home family in Bow Island on Sunday, December 1, 2013, at the age of 60 years.  Cathy was born on January 23, 1953, in Luscar, Alberta.  She lived at home with her parents and her brother Ward until the age of 20 before moving to Michener Centre in Red Deer, Alberta in 1973.  Cathy enjoyed visits from her family until their health deteriorated.  She was predeceased by her mother in 1993, her father in 1996, and her brother in 1997.  In 2006, Cathy moved to Alfred Egan Home in Bow Island, Alberta. Cathy was a kind, gentle, unassuming woman, never demanding but always patient.  She enjoyed going out for lunch, sitting outside or going for walks in nice weather.  Cathy will be missed by the staff and friends whom she came to know as her family at Alfred Egan Home.  A Celebration of Cathy’s life will be held at the Alfred Egan Home, 938 – 1st Street East, Bow Island on Monday, December 9, 2013, at 2 p.m. with Reverend Father Fred Monk officiating.  Interment will follow at the Bow Island Cemetery.  (Condolences may be expressed by visiting www.cooksouthland.com)  Honoured to serve the family is COOK SOUTHLAND Funeral Chapel, 901 – 13 Street S.W., Medicine Hat, Alberta, T1A 4V4.   Telephone:  403-527-4655.

No Condolences for “CATHY HEDBERG”