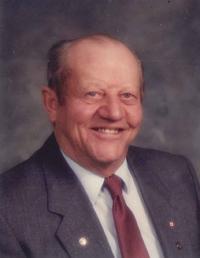 Mr. Michael “Mike” Kunz, beloved husband of Mrs. Barbara Kunz of Medicine Hat, passed away on Monday, December 16th, 2013 at the age of 86 years. Mike also leaves to cherish his memory three children, Carol Kunz (Alvin McMartin) of Lac La Biche, Maureen (Ian) Durrance of Fort Worth, Texas, and Pat (Donna) Kunz of Medicine Hat; two grandchildren, Matthew and Scott Kunz; one brother, John Kunz; and three sisters-in-law, Magdalena Gerun, Mary Kunz, and Rose Kunz. Mike was predeceased by his parents, John and Margaret Kunz; four brothers; two sisters in infancy; and one sister-in-law. Mike was raised on the family farm near Richmound and attended Dunbrody School. Farming was always his passion and he was interested in it until his passing. He especially liked trying new crops. Mike was a lifelong member and 4th degree Knights of Columbus and he served his community of Richmound on various boards throughout the years. He was also past Reeve of the RM of Fox Valley. Mike enjoyed a good game of cards especially bridge, and he loved to go fishing. He also loved to tell a story or joke just to make people laugh. His sense of humour and the sparkle in his eye were present until his passing. Those wishing to pay their respects may do so at SAAMIS MEMORIAL FUNERAL CHAPEL, # 1 Dunmore Road SE, on Friday from 7:00 to 9:00 p.m. and at HOLY FAMILY PARISH, 1451 Strachan Road SE, on Saturday from 10:00 to 10:55 a.m. Vigil Rites (Prayers) will be held in SAAMIS MEMORIAL FUNERAL CHAPEL on Friday, December 20th, 2013 at 7:00 p.m. The Funeral Mass will be celebrated at HOLY FAMILY PARISH on Saturday, December 21st, 2013 at 11:00 a.m. with Father Philip Le, celebrant. A Private Interment will follow in the Family Plot at Saamis Prairie View Cemetery. Memorial gifts in Mike’s memory may be made to the Holy Family Parish Building Fund, 1451 Strachan Road SE, Medicine Hat, Alberta, T1B 4V3. Condolences may be sent through www.saamis.com or to condolences@saamis.com subject heading Mike Kunz. Radio funeral announcement can be heard on Friday around 12:35 p.m. on 93.7 Praise FM. Funeral arrangements are entrusted to SAAMIS MEMORIAL FUNERAL CHAPEL AND CREMATORIUM, “The Chapel in the Park”, locally owned and directed. Should you wish any additional information, please telephone (403)528-2599