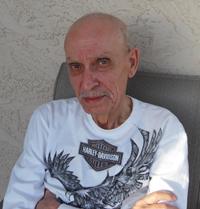 Wayne Barrie Schacher, beloved husband of Eva Schacher of Medicine Hat, passed away on Monday, December 23rd, 2013 at the age of 71 years. He also leaves to cherish his memory one son, Jay (Donna) Schacker of Medicine Hat; one daughter, Gwen (Wayne) Schneider of Fox Valley, SK; and three grandchildren, Shelbe Schacker, Evan and Raelyn Schneider. In addition he leaves numerous in-laws, nieces, nephews and friends to cherish his memory. Wayne was predeceased by one daughter, Marlo; and his parents, Art and Mary Schacher. Wayne was born on July 1st, 1942 in Medicine Hat. He spent his childhood years on the family farm in the Graburn district of Cypress Hills, Alberta. He completed his education in Medicine Hat. He was District Manager of DHL in Medicine Hat until his retirement in 2007. He enjoyed hunting, fishing and trap shooting, and spending time with friends and family. He will be fondly remembered for being meticulous and taking pride in everything he owned. Cremation has taken place. At Wayne’s request a Private Family Graveside Service will take place. Memorial gifts in Wayne’s memory may be made to the Charity of One’s Choice. Condolences may be sent through www.saamis.com or to condolences@saamis.com subject heading Wayne Schacher. Funeral arrangements are entrusted to SAAMIS MEMORIAL FUNERAL CHAPEL AND CREMATORIUM, “The Chapel in the Park”, locally owned and directed. Should you wish any additional information, please telephone (403)528-2599