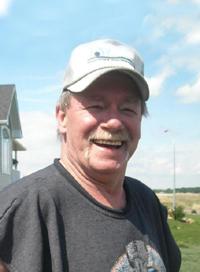 Mr. Roger Dirk of Medicine Hat, passed away on Saturday, December 21st, 2013 at the age of 59 years. Roger leaves to cherish his memory one son, Mike Dirk (Tiffany); one daughter, Vallista Hoffner; his mother, Lorraine Dirk, all of Medicine Hat; one step-son, Sandy Webber (Kim); one brother, Keith (Serena) Dirk; two sisters, Nancy (Bruce) Vassen and Peggy (Bill) Stewart; good friends, Chico & Teresa; as well as numerous nieces and nephews. Roger was predeceased by his father, Peter Dirk; one daughter, Marceya Dirk; one sister, Gloria Blaquiere; one sister-in-law, Rhonda Dirk; and his grandparents, Jacob (Katherine) Rath and Ambrose (Adeline) Dirk. Roger was born on October 8th, 1954 in Medicine Hat, where he was raised and educated. He enjoyed getting out and dancing, playing pool, golfing, and playing poker. Roger was well known for his love of sweets. He will be greatly missed by all those who knew and loved him. The Funeral Service will be held in SAAMIS MEMORIAL FUNERAL CHAPEL, #1 Dunmore Road SE, on Saturday, January 4th, 2014 at 1:00 p.m. with Gary W. Goran officiating. A private interment will take place at Redcliff Cemetery. Memorial gifts in Roger’s memory may be made to the Charity of One’s Choice. Condolences may be sent through www.saamis.com or to condolences@saamis.com subject heading Roger Dirk. Radio funeral announcement can be heard on Thursday around 12:35 p.m. on 93.7 Praise FM. Funeral arrangements are entrusted to SAAMIS MEMORIAL FUNERAL CHAPEL AND CREMATORIUM, “The Chapel in the Park”, locally owned and directed. Should you wish any additional information, please telephone (403)528-2599

Leave a Condolence for Robin