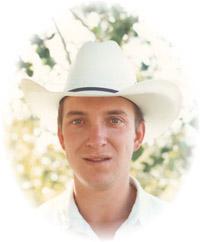 Randolph William “Randy Eisenbarth”, of Medicine Hat, passed away on Saturday, December 28th at the age of 48 years. He is survived by his dear children, Olivia and Elias, and their mother Samantha. Randy is also survived by his mother Lottie; sister Karen (Wayne Law) and son Devin; brother Gordon (Michele) and Alex, Mathew & Andrea; and brother Terry (Theresa) and Sarah & Ivan; as well as numerous aunts, uncles and cousins. He is predeceased by his father Herb (2001); grandparents William & Lydia Eisenbarth and Adolph & Julianna Miller as well as several aunts & uncles. Randy was born in Medicine Hat, attended school here and graduated in 1983; receiving acknowledgment as ‘best all around student’ for achievement in sports and academics. His love of all sports saw him play for the Hat High Mohawks as well as the Med Hat Cubs hockey team. He also played baseball and was introduced to rodeo at 10 years old as a ‘boys steer rider’. As a steer rider, an awarded trip to see the NFR in Oklahoma City cemented his passion for rodeo. Memories of ‘going down the road’ and the many good friends made were a big part of Randy’s later life. Randy attended the Medicine Hat College, and then transferred to the U of A to complete a degree in Recreation Administration. In Edmonton, he met Samantha; they found a shared love of horses. Randy continued to ride saddle broncs and rodeo as time and weekends allowed, until 1995. After graduating, Randy helped coordinate the Alberta Summer Games held in Redcliff and also worked at a youth program administered by the YMCA. An abundance of work in the trades saw Randy change occupations and become a journeyman pipe, steam & gas fitter, belonging to local #496 since 1994 and working construction jobs in both Alberta & Saskatchewan. Randy loved spending time with his kids, playing catch, showing them how to ride a horse, bike, fish, & hold a hockey stick; how to play any game. Olivia and Elias were his joy. A private family funeral service will be held January 4th. Expressions of sympathy may be sent to condolences@saamis.com, subject heading Randy Eisenbarth. Memorial gifts may be made to the YMCA Strong Kids Campaign at ymcastrongkids.ca; or the charity of one’s choice. Funeral arrangements are entrusted to SAAMIS MEMORIAL FUNERAL CHAPEL AND CREMATORIUM, “The Chapel in the Park”, locally owned and directed. Should you wish any additional information, please telephone (403)528-2599

Leave a Condolence for Dan Black