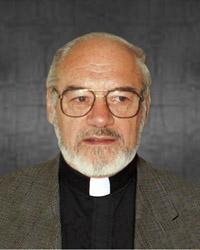 FATHER RICHARD GEORGE ZUBACK, of Lethbridge, passed away at St. Therese Villa on Sunday, December 29, 2013 at the age of 85 years.
Father Richard is remembered by his two brothers John (Verona) Zuback of Thunder Bay, ON and Ray “Wayne” Zuback of Medicine Hat, Ab. He is also survived by nieces and nephews; Rick (Sandie) Zuback, Mary Carol (Jim) Gellert, Cathy (Al) Brischuk, Rob (Deb) Zuback, Greg (Marion) Zuback, Catherine Zuback, Cheryl (Leo) Lalonde and Camille Zuback (Darcy), as well as a great neice Karley Lalonde. Father Richard will also be fondly remembered by a special cousin Dr. & Mrs. Alfred Pinchak of Cleveland, Ohio.
He was predeceased by his parents Nicholas and Mary Zuback and a sister Geraldine and her husband Calvin Post.
Father Richard was born May 21, 1928 in Lethbridge and completed his early education at St. Patrick’s School. He attended seminary at St. Joseph’s in Toronto and completed in Edmonton. He served numerous parishes including Cleveland, Ohio, Winfield, BC, Grande Prairie, AB and especially in Lethbridge at SS. Peter & Paul’s Church. Father Richard served as a reserve naval chaplain. He was a unique individual who was well known. He will be remembered in many ways especially by those in his parish and in choirs that he sang in.
Prayers-Parastas will be held at the SS. PETER & PAUL UKRAINIAN GREEK-CATHOLIC CHURCH, 643-12 “B” Street North, Lethbridge, AB on Friday, January 3, 2014 at 7:00 P.M.
A Funeral Divine Liturgy will be held at SS. PETER & PAUL UKRAINIAN GREEK-CATHOLIC CHURCH, 643-12 “B” Street North, Lethbridge, AB on Saturday, January 4, 2014 at 11:00 A.M., presided by Most Reverend Bishop David Motiuk, Eparch of Edmonton with the assistance of the Catholic Clergy.
Interment to follow in the Mountain View Cemetery.
If friends so desire, Memorial Donations may be made to the charity of one’s choice.
Honoured to serve the family, CORNERSTONE FUNERAL HOME AND CREMATORIUM, 2800 Mayor Magrath Drive South, Lethbridge, Alberta T1K 7B1. Telephone (403) 381-7777. E-mail: care@cornerstonefh.ca

No Condolences for “ZUBACK”