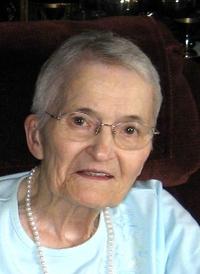 Mrs. Evelyn Degenhardt of Medicine Hat, beloved wife of the late Mr. Philip Degenhardt, passed away on Thursday, January 2nd, 2014 at the age of 92 years. Evelyn leaves to cherish her memory her son, Don (Colleen) Degenhardt of Medicine Hat; her daughter, Sharon (Tom) Folk of Richmound; four grandchildren, Melissa and Ashley Degenhardt both of Medicine Hat, and Mark (Crystal) Folk and their children Jack and Brandt of Medicine Hat, and Jay (Ryan) Folk and their children Oliver and Michael of Milton, Ontario; one brother-in-law, Thomas Moore of Medicine Hat; one sister-in-law, Clara Schmiess of Swift Current; as well as numerous nieces and nephews. Evelyn was predeceased by her husband, Philip; her parents, David and Katherine Schmiess; two brothers, Victor (Ethel) Schmiess and Willard Schmiess; and one sister, Marlene Moore. Evelyn was born and raised in the Rushlake area of Saskatchewan. She met Philip Degenhardt and they were married on September 27th, 1950 and lived their entire lives in Medicine Hat. Evelyn loved gardening, cooking and baking and was an excellent homemaker. She will be deeply missed by her family and friends. The Funeral Service will be held in SAAMIS MEMORIAL FUNERAL CHAPEL on Tuesday, January 7th, 2014 at 1:30 p.m. with Gary W. Goran officiating. Interment will follow in the Family Plot at Hillside Cemetery. Memorial gifts in Evelyn’s memory may be made to the Canadian Cancer Society, 102 – 1865 Dunmore Road SE, Medicine Hat, Alberta, T1A 1Z8. Condolences may be sent through www.saamis.com or to condolences@saamis.com subject heading Evelyn Degenhardt. Radio funeral announcement can be heard on Monday around 12:35 p.m. on 93.7 Praise FM. Funeral arrangements are entrusted to SAAMIS MEMORIAL FUNERAL CHAPEL AND CREMATORIUM, “The Chapel in the Park”, locally owned and directed. Should you wish any additional information, please telephone (403)528-2599