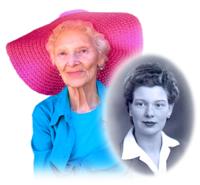 It is with heavy hearts that the family of Sheila Margaret Ferguson, beloved wife of John M. Ferguson, announce her peaceful passing while at the Masterpiece River Ridge on Thursday, January 2, 2014, at the age of 87 years.  Along with John, Sheila leaves to cherish her memory three children and their families:  son, Lloyd (Elaine) Ferguson and their son Kevin and his children Micah, Levi and Jirah;  son, Ian Ferguson and his daughter, Lindsay Ferguson;  daughter, Gwen (Brian) Ramsdale and their children, Dane Kosolofski, Kyle Kosolofski (Lisa Driver) and Tory (Brock) Beach.  Sheila was predeceased by her parents;  two sisters;  one brother;  one granddaughter in 1980 as well as a granddaughter through marriage to Kevin, Melanie (Serr) Ferguson.  Sheila Margaret Duff was born to proud parents, Henry and Violet Duff on December 6, 1926, in Empress, Alberta.  !n 1948, she married John McKeage Ferguson at Fifth Avenue Memorial United Church in Medicine Hat.  In her younger years, before becoming a full-time homemaker, Sheila worked at the Helmsdale School near Oyen, AB., as an instructor and also for a time as a Health Care Aide at the Empress Hospital.  In her younger years, Sheila was actively involved in her church with Canadian Girls in Training (CGIT) and during later years through her involvement with Vesper Service at Christmas and Easter and each Strawberry Shortcake Tea.  Sheila enjoyed time spent skating, riding bikes and dancing, but nothing compared to time spent with her family, especially the grandchildren and great-grandchildren.  Her caring and compassionate nature will leave a lasting impression on the hearts and minds of all those who knew and loved her.  A Celebration of Sheila’s life will be held at Cook Southland Funeral Chapel, 901 – 13 Street S.W., Medicine Hat, on Monday, January 6, 2014, at 11:00 A.M. with Life Celebrant Gerry Getz officiating.  A time of fellowship and refreshments will follow in the Cook Southland Reception Facility with a Private Interment thereafter at Hillside Cemetery.  (Condolences may be expressed by visiting www.cooksouthland.com)  If friends so desire, memorial tributes in memory of Sheila may be made directly to the Alzheimer Society of Alberta, 401D – 3 Street S.E., Medicine Hat, Alberta, T1A 0G8 or to The Children’s Wish Foundation, 39 Somerset Dale S.E., Medicine Hat, Alberta, T1B 0G9.  Honoured to serve the family is COOK SOUTHLAND Funeral Chapel, 901 – 13 Street S.W., Medicine Hat, Alberta, T1A 4V4.  Telephone:  403-527-6455.

No Condolences for “SHEILA MARGARET FERGUSON”