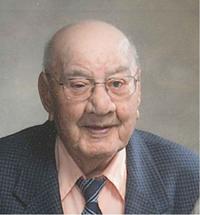 Daniel Berreth, beloved husband of Mrs. Violet Berreth of Medicine Hat, passed away on Wednesday, January 8, 2014 at the age of 97 years. Daniel also leaves to cherish his memory He is survived by his wife, Violet Berreth of Medicine Hat, AB; and son, Richard Berreth of Redcliff, AB. Daniel was preceded in death by Daniel Berreth of Medicine Hat passed away peacefully on Wednesday, January 8, the day of his 97th birthday.
Left to cherish his memory is his loving wife Violet. Dan and Violet would have celebrated their 71st Anniversary on January 11th. Dan is also lovingly remembered by his only child, Richard (Marilyn) Berreth of Redcliff, three granddaughters and six great-grandchildren: Gizelle (Duane) Rees of Airdrie and their children McKenna & Davyn; Dorlisa (Tyler) Prior of Medicine Hat and their children Adelynn & Jaren; Richelle Berreth of Carstairs and her daughters Isabelle & Abigail, as well as numerous nieces and nephews, and his faithful Jack Russell Terrier, Daisy.
Dan was born in the Sagathun District north of Maple Creek, SK on January 8th, 1917 to Henry and Lydia Berreth. Dan was raised in a family of 15 with 8 brothers and 6 sisters. He is survived by sisters Martha Underwood, Hilda Michaleski and Suzanna Wilson, as well as sister-in-law Nellie Elderkin. Dan was predeceased by his father Henry and mother Lydia, sisters, Rebecca, Helen and Lydia and brothers, Theodore, Albert, Henry, William, John, Reuben, Edwin and Alexander, as well as Violet’s parents and siblings.
Dan attended Northridge School and started working on ranches at age 15. He married Violet Elderkin in Medicine Hat on January 11th, 1943. While working at Reznechenko’ Garage in Piapot he started farming and ranching in the Piapot area and later farmed near Regina. Dan served in the army and was stationed in Winnipeg, MB and Terrace, B.C. Dan loved farming, ranching, operating his feed lot, raising chinchillas and trucking for the local farmers until his retirement at age 49 when he sold part of the farm.
In retirement, from 1966 until 1975, Dan owned, trained and raced thoroughbred horses across Canada and usually raced and wintered in Arizona. Dan’s favourite horse, Bold Bail, set the track record at Blue Bonnets in Montreal -an exciting event for his six horse stable.
In 1975, he moved to Medicine Hat and worked for Medican Construction doing landscaping. Dan enjoyed gardening, especially growing flowers, tomatoes, early potatoes and the fruit trees. He also enjoyed raising cockatiels. Dan was very talented mechanically and was able to repair almost anything.
He enjoyed rodeos, fishing, most sports, playing pool and cards, going to Tigers hockey games, riding the city bus to the mall and being with his family. Even in his last days, visits by his grandchildren and great- grandchildren brought smiles to his face.
Dan will be missed by his family but we will always have great memories and stories to share.
A Private Family Time of Remembrance will be held at a later date at the Piapot Cemetery, Piapot, SK. Memorial gifts in Daniel’s memory may be made to the Canadian Cancer Society. Condolences may be sent through www.saamis.com or to condolences@saamis.com subject heading Daniel Berreth. Funeral arrangements are entrusted to SAAMIS MEMORIAL FUNERAL CHAPEL AND CREMATORIUM, “The Chapel in the Park”, locally owned and directed. Should you wish any additional information, please telephone (403)528-2599