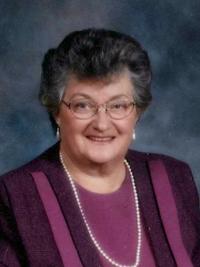 Elfrieda “Lottie” Eisenbarth passed away peacefully on Wednesday, January 15th, 2014 at the age of 75 years. Lottie leaves to cherish her memory daughter Karen (Wayne Law) and son Devin; son Gordon (Michele) Eisenbarth and Alex, Mathew and Andrea; daughter-in-law Samantha Hunter (Ralph) and Olivia and Elias, son Terry (Theresa) Eisenbarth and Sarah and Ivan. She is predeceased by her dear husband Herb and beloved son Randy. Lottie is fondly remembered by her sister Natalie Miller; sister-in-law Carol (Bruno) Miller; sister Rose (late husband Bob) Sproule, sister Kathy (Larry) Sandulak and brother Ron (Elsie) Miller and their families; as well as numerous cousins and in-laws. She is also predeceased by her parents Adolf and Julianna Miller; by brother Bruno Miller and brother Ed Miller. Lottie was born January 12th, 1939 in the farm village of Rheinfeld, Sask and moved to the existing family farm just outside Herbert, Sask in 1946. Graduating from Herbert High school and attending numerous reunions, the latest being the 55th year in 2012, is a testament to the strong and caring friendships made in those early years. A job as an AGT telephone switchboard operator brought her to Medicine Hat in 1957. She met Herb, was married in ’58 and began their family in a newly built home adjacent the prairie that is now the Crestwood area of town. Children, cooking and gardening were a part of the homemaking occupation that she truly adored. Her mother’s German heritage was evident in meals and baking, so much to the benefit of all around. The self-sufficiency taught on the farm in childhood years benefitted her when the family moved just north of Medicine Hat in 1972. Lottie found herself taking care of the farm and family as construction work often took Herb to remote camp jobs, returning only for the weekend. Gardening and cooking, being “Gramma” and attending grandchildren’s school & sporting events, was her enjoyment in later years. Dearly loved and sadly missed, her passing leaves emptiness now filled with the cherished memories of those she touched. The Funeral service will be held in VICTORY LUTHERAN CHURCH, 2793 Southview Drive SE, on Wednesday, January 22nd, 2014 at 1:30 p.m. with Pastor Joe Leavengood officiating. Memorial gifts may be made to the YMCA Strong Kids Campaign at ymcastrongkids.ca or the charity of one’s choice. Expressions of sympathy can be sent to condolences@saamis.com, subject heading Lottie Eisenbarth. Radio funeral announcement can be heard on Tuesday around 11:45 p.m. on 93.7 Praise FM. Funeral arrangements are entrusted to SAAMIS MEMORIAL FUNERAL CHAPEL AND CREMATORIUM, “The Chapel in the Park”, locally owned and directed. Should you wish any additional information, please telephone (403)528-2599