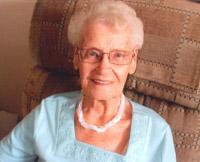 It is with great sadness we say that our beloved wife, mother, grandmother and great grandmother, Ruth Flaig has left us for her final resting place in Heaven to be with her Lord and Saviour, Jesus Christ on Saturday, January 18th, 2014 at the age of 87 years. She leaves to mourn her passing her husband, Frederick “Fred” Flaig; two sons, Larry (Carma) Flaig and Keith (Teressa) Flaig; one daughter, Karen (Tim) Hittel; two grandchildren, Kevin (Erin) Hittel and Kristi (David) Stevens; four great grandchildren, Koby Hittel, Rhys Hittel, Reid Stevens and Kipp Stevens; two brothers, John Boettcher and William “Bill” (Florence) Boettcher; three sisters, Amelia Christman, Emma Haag and Mary Fischer; as well as numerous nieces and nephews. Ruth was predeceased by her parents, Nathaniel and Martha Boettcher; one son, Douglas Morley; one grandson, Ricky Flaig; one brother, Fred (Helen) Boettcher; three brothers-in-law, Emil Christman, Elmer Haag and Bill Fischer; and one sister-in-law, Elsie Boettcher. Ruth was born on May 19th, 1926 in Schuler, Alberta and received all her education in a country school. She married Fred Flaig on January 20th, 1945 in Medicine Hat and they farmed at Hilda. She was a loving farm wife, raising us and still helping run the farm. Ruth was very active in the church throughout her life. She sang in the choir, played the accordion, organ, guitar and always taught Bible Vacation School and Sunday school every Sunday. Fred and Ruth returned to Medicine Hat in 1976 where Ruth enjoyed working at a few different clothing stores. She also won many first prize awards for her crocheting and knitting. She sewed twin toddler outfits for us, done so perfectly. Ruth loved to read about real people and events and never stopped learning. She enjoyed crossword puzzles; the harder the better. Two of mom’s favorite memories was the trip to Germany with Fred in 1976 and a car trip in 1950 taking them through 8 states in 2 weeks. Mom loved her grandchildren and was always there to care and support them. In her later years, her great grandchildren brought much joy to her life and it is truly a blessing that such a bond between them grew so wonderfully. We are so very proud of our mother and will miss her so much and will never stop loving you and will never forget you.
God is so good.
“Goodbyes are the law of earth, reunions are the law of Heaven.”

The Funeral Service will be held in SAAMIS MEMORIAL FUNERAL CHAPEL, #1 Dunmore Road SE, on Thursday, January 23rd, 2014 at 1:00 p.m. with Reverend Mark Bolender officiating. A private interment will follow in the Family Plot at Saamis Prairie View Cemetery. Memorial gifts in Ruth’s memory may be made to the Palliative Care Unit, c/o Medicine Hat Regional Hospital, 666 – 5th Street SW, Medicine Hat, Alberta, T1A 4H6. Condolences may be sent through www.saamis.com or www.gonebutnotforgotten.ca or to condolences@saamis.com subject heading Ruth Flaig. Radio funeral announcement can be heard on Wednesday around 11:45 p.m. on 93.7 Praise FM. Funeral arrangements are entrusted to SAAMIS MEMORIAL FUNERAL CHAPEL AND CREMATORIUM, “The Chapel in the Park”, locally owned and directed. Should you wish any additional information, please telephone (403)528-2599

Leave a Condolence for Leonard Klaudt