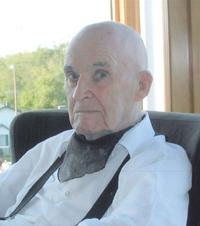 Mr. George Dietrich, beloved husband of Mrs. Iva Dietrich of Medicine Hat, passed away on Monday, January 27th, 2014 at the age of 90 years. George Dietrich was born in Richmound, Saskatchewan on May 16th, 1923. George was predeceased by his parents, Christian and Magdalena; two infant siblings; and his sister, Edith. He is survived by his wife, Iva; two children, Dwaine (Pat) and Cynthia (Brian); five grandchildren; four great grandchildren; and siblings, Leonard (Josephine) and Delores (Gordon Goebel); Edith’s best friend, Tom Rud; Iva’s sister, Caroline “Kay” Long; as well as numerous nieces and nephews. George grew up on the family farm southeast of Richmound and in October 1947 he married Iva Wilnechenko from Maple Creek. Together, they stayed on the family farm until moving to Golden Prairie in 1949 where George ran the Pioneer elevator. In 1954 George and Iva moved to Maple Creek where George established his construction company. While in Maple Creek George developed his passion for fishing: if he wasn’t fishing, he was talking fishing or fixing his fishing equipment. No lake was too far away that George wouldn’t go if he heard they were catching fish. In 1967 the family moved to Medicine Hat where he worked with a variety of construction companies including Oland, Kellogg and Fluor eventually becoming a site Superintendent. After his retirement in 1983, George and Iva spent many happy days camping and fishing. George’s other passion was his yard: the flowers, trees and birds. Many happy hours were spent in his backyard with his grandchildren. In 2006 George and Iva moved into Chinook Village where they remained until his passing. George will be fondly missed by all his family and friends. Vigil Rites (Prayers) will be held in SAAMIS MEMORIAL FUNERAL CHAPEL, #1 Dunmore Road SE, on Wednesday, January 29th, 2014 at 7:00 p.m. The Funeral Mass will be celebrated at ST. PATRICK’S ROMAN CATHOLIC CHURCH, 238 – 2nd Avenue NE, on Thursday, January 30th, 2014 at 11:00 a.m. with Father Matthew Emmelkamp, celebrant. A Private Interment will follow in the Roman Catholic Section at Hillside Cemetery. Memorial gifts in George’s memory may be made to the CNIB, 105, 520 – 2nd Street SE, Medicine Hat, Alberta, T1A 0C6. Condolences may be sent through www.saamis.com or to condolences@saamis.com subject heading George Dietrich. Radio funeral announcement can be heard on Wednesday 11:45 a.m. on 93.7 Praise FM. Funeral arrangements are entrusted to SAAMIS MEMORIAL FUNERAL CHAPEL AND CREMATORIUM, “The Chapel in the Park”, locally owned and directed. Should you wish any additional information, please telephone (403)528-2599

Leave a Condolence for George Dietrich