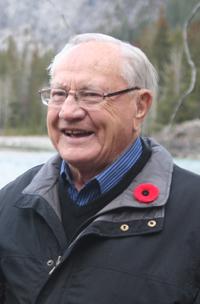 1921 – 2014
Oscar Herringer, beloved husband of Edna Herringer, went home to his Lord and Savior on Monday, January 27, 2014 at the age of 92 years. He passed away quietly at his home. Oscar was a man of integrity and deep faith who loved life.
The Funeral Service for Oscar will be held at the RockPointe Church Bowridge Site, 12 Bowridge Drive N.W., Calgary on Friday, January 31, 2014 at 1:30 P.M. A family graveside service will be held at the Taber Memorial Garden on Saturday, February 1, 2014. A time for remembering Oscar will follow. Condolences may be forwarded by visiting our website at www.southlandfuneral.com.
Oscar will be deeply missed by his wife Edna; his children Bryan (Susan) Herringer of Calgary and Shauna (Ron) Kinniburgh of Calgary, along with six grandchildren and eight great grandchildren; three brothers Wilf of Calgary, Sid (Margaret) of Langley, British Columbia, Clarence (Ruth) of Medicine Hat and by numerous nieces and nephews.
He was predeceased by one brother and five sisters.
Oscar was born November 23, 1921 in Medicine Hat to John and Caroline Heringer. He worked a number of jobs in the Medicine Hat area as well as spending time in the Canadian Army prior to joining Safeway in Medicine Hat as a Meat Cutter. Oscar was subsequently transferred to Taber as Safeway’s Meat Manager where he spent the majority of his working career before retiring.  After retiring from Safeway, Oscar drove school bus for the Taber School Division for nine years, a job he absolutely enjoyed. Oscar and Edna were married in Medicine Hat on October 18, 1947. They had been married for sixty six years at the time of his death.
If friends so desire, memorial tributes in Oscar’s name may be made directly to the Heart & Stroke Foundation of Alberta, Box 2211, Lethbridge, Alberta T1J 4K7 or to the Alberta Cancer Foundation, c/o Tom Baker Cancer Centre, 1331 – 29 Street N.W., Calgary, Alberta T2N 4N2.
Arrangements in care of Southland Funeral Chapel, Taber. Telephone: 1-888-223-0116.

No Condolences for “OSCAR HERRINGER”