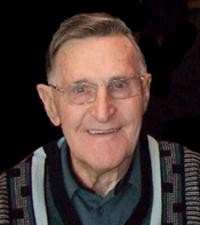 Walter William Severin was born on September 30th, 1921 in Langenberg, Saskatchewan. He was raised on a small farm and served as a gun Sergeant for five years in WWII. He then moved to Oliver, BC marrying Elsie Mathilda Beach (nee Martin) in June 1947 and adopting Elsie’s son, Larry Martin. Duane and Marilyn were born and they chose Lois and Greg. Walter and his family enjoyed farming in Glidden, Saskatchewan and later in Winnifred, Alberta. Walter’s passion was carpentry; we are still proud of his professional showcases built for Roset stores. Following Elsie’s passing in 1990, Walter married Flo (Ehret) in 1991, accepting her family as his own. Walter was predeceased by his parents, John Henry Severin, born in Minneapolis, Minnesota, and Anna Sarah Burton, born in Bloomington, Illinois. He was also predeceased by his siblings, Leslie, Ruth and Rudy; and in 2013 his son, Larry, passed away.  Walter is survived by his wife, Flo; his children, Duane (David), Marilyn (Duane), Lois (Shane), Greg (Yvonne), and Dani; six grandchildren; five great grandchildren; and his chosen family’s children, Jenny (Roy), Del (Stan), Sandy, Les (Shelley), Michele (Roy), and Todd (Andrea); ten grandchildren; and twelve great grandchildren. Walter spent his last few months at the Good Samaritan Society who comforted him well in his last days. Walter was surrounded by family at his peaceful passing. Described as a very caring person, he loved helping others and it is said he “was a perfect gentleman” right to the end. We rejoice that he is there in OUR future and believe we’ll see him again one day.
Psalm 116:15 Precious in the sight of the Lord is the death of His Saints.
The Funeral Service will be held at FIRST ASSEMBLY OF GOD, 395 – 9th Street SE, on Thursday, February 13th, 2014 at 1:00 p.m. with Reverend Dr. Shane P. Andrus and Pastor Ken Roset, co-officiating. Interment will follow in the Family Plot at Hillside Cemetery. Condolences may be sent through www.saamis.com or to condolences@saamis.com subject heading Walter Severin. Funeral arrangements are entrusted to SAAMIS MEMORIAL FUNERAL CHAPEL CREMATORIUM & RECEPTION CENTRE, “The Chapel in the Park”, locally owned and directed. Should you wish any additional information, please telephone (403)528-2599