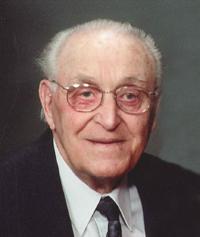 With deep sadness we announce the passing of Edward Miller on Saturday, February 22nd, 2014 at the age of 91 years. Edward leaves to cherish in his memory his wife, Gladys; his son, Ken (Marilyn) Miller; his grandchildren, Brent Miller (Sarah Giles), Andrea Miller (Brent Hopfauf), Sonia (Tony) Leahy, Landyn Schnell; his son-in-law, Glen Schnell (Victoria Westwood); sisters, Elsie Beres and Anna (Clarence) Stickel; sister-in-law, Marjorie Jeske; and many nieces and nephews. Edward was predeceased by his daughter, Laura Schnell in 2008; brothers, Henry, Emmanuel, Emil and Bill; sisters, Ida Christiaens and Emma Heckenliable. Those wishing to pay their respects may do so at SAAMIS MEMORIAL FUNERAL CHAPEL, #1 Dunmore Road SE, on Tuesday from 8:00 until 9:00 p.m. and on Wednesday from 12:00 until 12:55 p.m. The Funeral Service will be held in SAAMIS MEMORIAL FUNERAL CHAPEL on Wednesday, February 26th, 2014 at 1:00 p.m. with Gary W. Goran officiating. A private interment will take place in the Family Plot at Hillside Cemetery. Memorial gifts in Edward’s memory may be made to the Charity of One’s Choice. Condolences may be sent through www.saamis.com or to condolences@saamis.com subject heading Edward Miller. Radio funeral announcement can be heard on Tuesday around 11:45 a.m. on 93.7 Praise FM. Funeral arrangements are entrusted to SAAMIS MEMORIAL FUNERAL CHAPEL CREMATORIUM & RECEPTION CENTRE, “The Chapel in the Park”, locally owned and directed. Should you wish any additional information, please telephone (403)528-2599