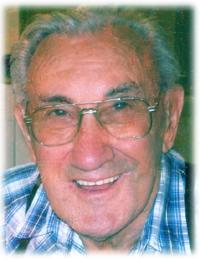 1926 ~ 2014
Doug was born July 9, 1926 in Manitoba.  As a young man he worked for his uncle on the farm where he learned many skills, a not so colorful language and a great sense of humour.  He followed his dad into WWII and later went to the Korean War.  Mabel and Doug married and resided in Redcliff where they raised four great children, Darcy, Deanie, Dixie and Stewart.  They in turn gave them grandchildren and great-grandchildren.  Doug worked at Suffield driving bus, the old fertilizer plant and then on his own with DEW Transport.  He acquired tree planting trucks which kept the boys busy.  Off to Fort McMurray for 10 years and back to Redcliff for the golden years.  Doug had a generous nature and helped where he could.  Many pets were a special part of his enjoyment.  In 2004 he met and married Gail.  He lived in Medicine Hat and lastly resided at South Country Village where he received excellent care.  He passed away on February 20, 2014 at the age of 87.
All glory goes to God our Father for Doug’s greatest achievement – becoming a member of God’s family through Jesus Christ our Lord.
A service in honour of Doug’s life will be held at a later time.  (Condolences may be expressed by visiting www.cooksouthland.com)  Memorial donations in Doug’s name may be made directly to the SPCA, 55 Southwest Drive S.W., Medicine Hat, Alberta, T1A 8E8 or to the Alzheimer Society of Alberta, 401D – 3rd Street S.E., Medicine Hat, Alberta, T1A 0G8.  Honoured to serve the family is Cook Southland Funeral Chapel, 901 – 13th Street S.W. Medicine Hat, Alberta T1A 4V4 Phone 403-527-6455

No Condolences for “DOUG MacDOUGALL”