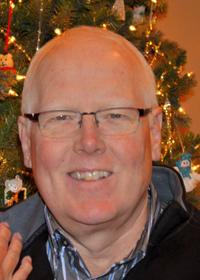 The family of Leslie Brent Erickson is deeply saddened to announce his passing on March 11, 2014 in Lethbridge, Alberta at the age of 58 years.
Les was born on June 7, 1955 in Flin Flon, Manitoba to Bill and Audrey Erickson. Les is predeceased by his father Bill Erickson and his special uncle Angus Ketchen. Les will be greatly missed by his wife Paulette and his children Warren Erickson and Tanya Sera (Mark) and his granddaughters (the little angels) Jaelyn and Madelin; his mother Audrey Krueger (Nana), brother Darrel Erickson (Judy) and sister Sandra Ferris (Rick) and their families also mourn his end of life; Paulette’s family, the Dionne’s, are also grieving his passing.
Les was a successful banker and economic development manager in southern Alberta. He was the branch manager of the Canadian Western Bank in Lethbridge until he became ill. He was an active member of the Sunrise Rotary Clubs in Medicine Hat and Lethbridge. He also sat on the board of the Medicine Hat Community Foundation for a number of years. Les was one of the founders of the of the Alberta Youth Entrepreneurship camp where he also served as camp director for ten years. Spending time with his family, travelling to warm destinations and enjoying outside activities such as golf were all a big part of Les’s life.
In lieu of flowers, donations can be made to the Canadian Cancer Society, 317- 10th Street South, Lethbridge, AB T1J 9Z9.
A Memorial Service will be held at 11:00am on Monday, March 17, 2014 at MARTIN BROTHERS RIVERVIEW CHAPEL, 610 4th Street South, Lethbridge, with Reverend Terry Shillington, officiating.
Funeral arrangements entrusted to Martin Brothers Funeral Chapels Ltd. 1.800.382.2901. Send condolences at www.mbfunerals.com.

No Condolences for “LES ERICKSON”