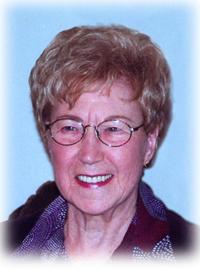 Mrs. Marjorie Wutzke, beloved wife of the late Mr. Raymond (Ray) Wutzke, passed away peacefully on Saturday, March 29, 2014, at the age of 91 years.  Marjorie was born September 9, 1922 in Brighton, Sussex, England, one of ten children born to Sidney and May House.  She attended school until the age of 14 at which time she entered the workforce.  This was due to the fact that High School was not an option for students.  She remembered the days working at the Schweppes factory and hearing the distinct sounds of war around her.   At the age of 22, she met a handsome man in uniform, Raymond Wutzke.  They were later married on November 10, 1946 in Slough, England.  While in England, their marriage was blessed with the birth of their daughter, Carol.  In July of 1946, Raymond returned to Canada and in September of that same year, Marjorie followed with her baby girl.  The family settled in Medicine Hat where their family grew with the birth of a baby boy, Don.  Family meant everything to her… she loved the company of her children and grandchildren and was truly a very good woman, a lady of class!   Marjorie accepted life as it came and was genuine, caring and gracious in her character.  She had a wonderful sense of humor, enjoyed life and knew how to have fun.  She was very active and enjoyed  bowling, golfing, knitting and sewing for her family.  As a young lady she especially loved to go dancing and could still be found kicking up her heels well into her 80’s!  She was dearly loved and will be missed by her only daughter, Carol (Dennis) Schlenker;  grandchildren, Corey (Randy) Campbell and their children, Ashley and Cole;  Kevin (Marla) Schlenker and their children, Alivia, AJ and Juliana;  Murray (Kelly) Schlenker.  She is also survived by the grandchildren Don gave her, Shay (Chad) Endo and their daughter, Abbey;  Matt (Sarah) Wutzke and their children, Brandon, Cambria and Parker; Chad (Jena) Wutzke;  two sisters, Jean (Roy) Dudley and Do Danielson.  Marjorie was predeceased by her husband Raymond Wutzke;  a son, Don Wutzke; three brothers and four sisters.  Those wishing to pay their respects may do so beginning one hour prior to the Funeral Service which will be held at Cook Southland Funeral Chapel, 901 – 13th Street S.W., on Wednesday, April 2, 2014, at 11:00 a.m. with Life Celebrant Gerry Getz officiating.  A reception will immediately follow in the Cook Southland Reception Facility.  (Condolences may be expressed by visiting www.cooksouthland.com)  Memorial donations in Marjorie’s name may be made directly to the Canadian Cancer Society, 102 Crestwood Square One, 1865 Dunmore Road S.E., Medicine Hat, Alberta, T1A 1Z8 or to the Heart and Stroke Foundation of Alberta, 124, 430 – 6th Avenue S.E., Medicine Hat, Alberta, T1A 2S8.   Honoured to serve the family is Cook Southland Funeral Chapel, 901 – 13th Street S.W. Medicine Hat, Alberta T1A 4V4 Phone 403-527-6455

One Condolence for “MARJORIE WUTZKE”