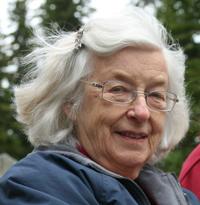 Sara “Sally” Harrity of Medicine Hat, beloved wife of the late Harold “Harry” Harrity, passed away on Sunday, April 6th, 2014 at the age of 82 years. Sally leaves to cherish her memory two sons, Donald “Ted” (Christy Gustavison) Harrity and Robert Harrity; three daughters, Colleen (Ronald) Bruce, Joanne (Bill) Bradbury, and Lynn (Curt) Lester; eight grandchildren, Craig, Andrew (Darby), Stephen, Sara (Russell), Emily (Peter), Megan (Roy), Alison (Nathan), and Catriona; three great-grandchildren, Hayden, Avery and James; one brother, Don (Nora) Stewart; as well as numerous nieces and nephews. Besides her husband, Harry, Sally was predeceased by her parents, Wilfrid and Jessie Stewart; one grandson, Nicholas; one brother, Frank; and one sister, Ruth. Sally was born in Saskatoon near the end of summer holidays, just in time for the family to get back to Manitoba and Granddad to take up his post as Principal of Rivers School. As a girl she delivered newspapers all over town, and to the airbase, a hive of activity during the war years. Summers were spent camping at Clear Lake and Star Lake, and car trips all over Western Canada and the USA. She went off to the U of M and earned a BSc with honours, unusual for the time. After graduating, Sally worked in a textile lab in Drummondville, PQ, but returned to Rivers for her holidays. A young paratrooper named Harry Harrity arrived as one of the instructors at the Canadian Parachute Training Centre after the war. Romance bloomed and they married in 1952. Their lives were busy ever after, with children arriving and the frequent moves of a military life. Travel was a constant theme on weekends and holidays, whether in Canada or while stationed in Europe. We lost Dad many years ago, but Mom carried on, nurturing and inspiring children and grandchildren, visiting and travelling with them, sharing adventures, her curiosity, her love of life and her gentle spirit. Love you.
A Celebration of Sally’s Life will be held at a later date. Memorial gifts in Sally’s memory may be made to the Military Families Fund, www.militaryfamiliesfund.ca or to the Alberta Heart & Stroke Foundation, #124, 430 – 6th Avenue SE, Medicine Hat, Alberta, T1A 2S8. Condolences may be sent through www.saamis.com or to condolences@saamis.com subject heading Sally Harrity. Funeral arrangements are entrusted to SAAMIS MEMORIAL FUNERAL CHAPEL CREMATORIUM & RECEPTION CENTRE, “The Chapel in the Park”, locally owned and directed. Should you wish any additional information, please telephone (403)528-2599