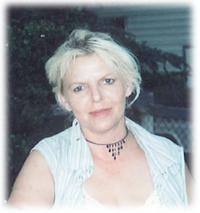 Trina Marie Drader born on July 18th, 1961, passed away on April 3rd, 2014 leaving behind best friend and lover, Clayton Hay; daughter, Jackie; and son, John. Trina was predeceased by one son, Darcy. Trina had three older brothers, Cliff, Jack and Darcy; three younger brothers, Rick, Jim and Frank; three grandchildren, Lakotaa, Jonathan- Darcy, and Stephanie; four step- children; her mother, Grace; and too many friends and relatives to mention. Her love and support helped everybody she came into contact with. Life goes on for us to learn from her life with us. Those wishing to pay their respects may do so at SAAMIS MEMORIAL FUNERAL CHAPEL, #1 Dunmore Road SE, on Thursday from 7:00 to 9:00 p.m. The Funeral Service will be held in SAAMIS MEMORIAL FUNERAL CHAPEL on Friday, April 11th, 2014 at 1:30 p.m. with Gary W. Goran officiating. Memorial gifts in Trina’s memory may be made to the Charity of One’s Choice. Condolences may be sent through www.saamis.com or to condolences@saamis.com subject heading Trina Drader. Radio funeral announcement can be heard on Thursday around 11:45 a.m. on 93.7 Praise FM. Funeral arrangements are entrusted to SAAMIS MEMORIAL FUNERAL CHAPEL CREMATORIUM & RECEPTION CENTRE, “The Chapel in the Park”, locally owned and directed. Should you wish any additional information, please telephone (403)528-2599