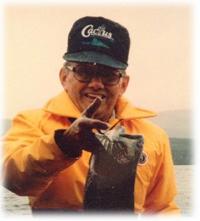 Emil was born in 1927 in Romania to Reinhold and Lydia Richter. He moved from the old country to Medicine Hat, Alberta in 1951 where he met the love of his life Marie Brose. Together they made a life and had 7 wonderful children. They moved their family to Prince George, BC in 1971 and called PG home till they made the move to Leduc, Alberta in 2006. Emil, lovingly known as Opa to all, loved the outdoors and sun…you could always find Opa lying under a tree taking a nap in the sun. He enjoyed fishing trips, long walks and time spent with his family.
Opa will be missed by all who knew him, his wife Marie and his children: Dieter and Sue Richter, Harry Richter, Esther and Gerry Keen, Nelly Srochenski, Ron and Brenda Richter, Heidy and Mike Warchol & Dave and Celine Richter. He also leaves behind numerous grandchildren, great-grandchildren and lots more family and friends that loved him.
Opa was pre-deceased by many family and friends along with his grandson Philip Richter. We know that Phil was waiting for you Opa and you are together again telling stories, catching up and playing 3 spot.
Till we meet again, we will remember your infectious smile and great hugs. We love you.
There will be a viewing from 1-2 pm on Thursday, April 10 at Hainstock and Sons Funeral Chapel 4802-47th Ave in Leduc, AB. There will then be a graveside interment at Leduc Cemetery followed by a celebration of life at The Salem Mews Twilight Room 4421-46th Street in Leduc, AB.
Arrangements in care of Hainstock & Son Leduc, AB. (780) 986-2151