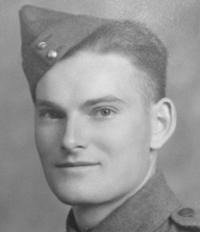 Mr. Cecil Hugh King of Medicine Hat, formerly of Claydon and Frontier, Saskatchewan, passed away at Medicine Hat Regional Hospital on Saturday, April 05, 2014 at the age of 93 years.
To cherish Cecil’s memory he leaves one son Warren (Norma), two grandsons, Brock (Christine) and Denton, one sister, Lois Iverson, one brother-in-law, Richard Anderson (Jean) as well as numerous nieces, nephews, and extended family.
He was predeceased by his beloved wife of 60 years Helen King, his parents Frank and Edna King, and his brothers-in-law Harold Anderson, Leslie Anderson, Willard Anderson and Clarence Iverson.
Cecil grew up on a farm west of Claydon, Saskatchewan and worked on the farm until he enlisted in the Canadian Armed Forces and served Canada during World War II.  After returning home Cecil continued to run the family farm. On January 6, 1949 he married Helen King (nee Anderson) and they lived in Claydon with Cecil running the family farm until they retired to Frontier in the fall of 1984. To be closer to their grandsons, Cecil and Helen moved to Medicine Hat where Cecil enjoyed watching his grandson’s hockey and have coffee with friends and family.
Funeral Services will be held Friday, April 11, 2014 at 1:00 p.m. from Frontier United Church in Frontier with Minister Shelby Kinrade officiating. Interment will take place at Frontier Municipal Cemetery. Binkley’s Funeral Service of Shaunavon (www.Binkleys.com) was in charge of the arrangements.
Pallbearers were Jonas Abramson, Donnie Anderson, Allan Iverson, Barry Hirsch, Greg Balas and Jim Johnson.
Binkley’s Funeral Service, Maple Creek and Leader, in charge of arrangements. 306-662-2292