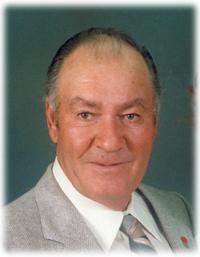 Otto passed away peacefully on April 8, 2014, at the age of 86 years with his family at his side.  Along with Theresa, his beloved wife of 62 years, left to cherish Otto’s memory are their five children:  Pat (Donna), Terry (Alicia), Brian, Robert (Sheila-Rae) and Mary Lou as well as their seven grandchildren and nine great-grandchildren.  He was predeceased by his parents, David and Anna Schmunk;  brother, Dave;  sisters, Mary, Mollie, Pauline, Lynn, Esther and Irene as well as one grandson, Danny.  Otto was born on November 13, 1927, on a farm South of Leader, Saskatchewan.  He was the youngest of his siblings.  He married the love of his life on November 19, 1951, in Rosetown, Saskatchewan.  Otto farmed in Leader where they raised their family.  In 1967, the family moved to Medicine Hat.  He enjoyed visiting the family farm in his later years.  Otto had many hobbies such as fishing, goose hunting, playing cards, camping and most importantly, his family.  Quoted from Otto, “I have been blessed with many things.  Firstly, my wonderful wife who has stood by me for 62 years and guided me.  We have been blessed with some of the finest of family and friends.  I thank you all, you have been extra good to Theresa and myself.  Life would not be complete without our wonderful grandchildren.  I love you all.”  Vigil Prayers will be recited at St. Patrick’s Roman Catholic Church, 238 – 2 Avenue N.E., Medicine Hat on Thursday, April 10, 2014, at 7:00 p.m.  The Funeral Mass will be celebrated at St. Patrick’s Roman Catholic Church on Friday, April 11, 2014, at 2:00 p.m. with the Very Reverend Father Long Vu celebrant.  A time of fellowship and refreshments will follow immediately thereafter in the Parish Hall with Private Interment to take place at a later date.  Family wish to extend their heartfelt appreciation to  Dr. Wong, the nurses and staff at Masterpiece Living and the Medicine Hat Regional Hospital for the wonderful care that Otto received.  (Condolences may be expressed by visiting www.cooksouthland.com)  If friends so desire, memorial tributes in memory of Otto may be made directly to the charity of one’s choice.  Honoured to serve the family is COOK SOOUTHLAND Funeral Chapel, 901 – 13 Street S.W., Medicine Hat, Alberta, T1A 4V4.   Telephone:  403-527-6455.