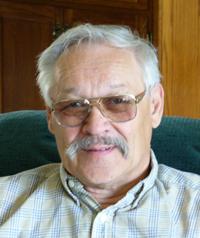 Gerhard “Gerry” Engel passed away peacefully with his family at his side on Tuesday, January 28th, 2014, beloved spouse of Dorinda and loving father to son, Robert (Sheila) Engel, daughter, Cathy Engel, and step-son, Trevor Trainor. Also surviving are his siblings, Waldemar of Stade, Germany, Erwin of Prince George, BC, and Gerda (Ernie) Meston of Swift Current, SK; Dorinda’s parents, Louis and Mary Trainor of Summerside, PEI; brothers-in-law, George (Marg) Trainor and St. Clair Trainor, both of Medicine Hat; sister-in-law, Sheila Trainor of Summerside; and niece, Jillian Trainor of Charlottetown, PEI; the mother of Robert and Cathy, Carol McIvor; numerous nieces and nephews in Canada and Germany; and his furry friend, Molly. Gerhard was predeceased by his parents, Wilhelm and Elsa Engel; his son, David; his son-in-law, Eric Kochie; his sister, Hildegard; and his sister-in-law, Eunice Trainor. Born on August 26th, 1937 in Bessarabia, Romania, Gerhard along with his parents and siblings moved to Germany and in 1954 came to Canada, eventually settling in Redcliff. After working at Brick & Coal, Dominion Glass, and Press Brick, he began his long-term employment with the Goodyear Tire plant in 1966, retiring in 1997. Family came first with Gerhard. His other interests were fishing, playing soccer, and rebuilding vehicle engines. The family would like to thank Dr. Booyens and his staff for the exceptional care of Gerhard. You made everything so much easier on us. To South Country Village (Sunnyview) and Masterpiece staff for making Gerhard as comfortable as possible, and to niece, Alex Vachon for being there for support. Also we would like to thank everyone who phoned, sent cards and dropped off food. A Graveside Service will be held at SAAMIS PRAIRIE VIEW CEMETERY, 5160 Gershaw Drive SW, on Saturday, May 24th, 2014 at 2:30 p.m. with Gary W. Goran officiating. Anyone wishing to attend is asked to meet at the cemetery at 2:15 p.m. In lieu of flowers, memorial gifts in Gerhard’s memory may be made to the Alzheimer’s Society, 401D – 3rd Street SE, Medicine Hat, Alberta, T1A 0G8, or to the Alberta Heart & Stroke Foundation, #124, 430 – 6th Avenue SE, Medicine Hat, Alberta, T1A 2S8, or to the Margery E. Yuill Cancer Centre, 666 – 5th Street SW, Medicine Hat, Alberta, T1A 4H6, or to the ALS Society, #400, 320 – 23rd Avenue SW, Calgary, Alberta, T2S 0J2. Condolences may be sent through www.saamis.com or to condolences@saamis.com subject heading Gerhard Engel. Funeral arrangements are entrusted to SAAMIS MEMORIAL FUNERAL CHAPEL CREMATORIUM & RECEPTION CENTRE, \”The Chapel in the Park\”, locally owned and directed. Should you wish any additional information, please telephone (403)528-2599