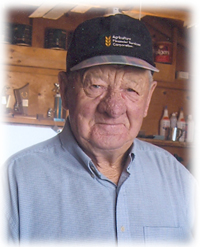 December 16, 1930 ~ May 14, 2014 It is with sadness that the family of Theodore “Ted” John Mahura of Oyen, beloved husband of Erika Mahura, announce his passing while at the Medicine Hat Regional Hospital on Wednesday, May 14, 2014, at the age of 83 years. Ted was born in Empress, AB., and was the eldest of seven children growing up on the farm 10 miles south of Acadia Valley. He attended Grant school and after completing Grade 9, he continued to help his parents with the farm. On January 24, 1959, he married Erika Specht at St. Peter and Paul Catholic Church in Acadia Valley. From this union, four daughters were born, Cheryl, Dianne, Denise and Lisa. Ted was a faithful member of St. Mary’s Catholic Church in Acadia Valley where he served on Parish Council. and was a life-time member of the Knights of Columbus. Ted was a dedicated farmer and served on the board of the C.A.R.A, an Agriculture research station in Oyen. He farmed until he was 70, but his heart never could hang up the tractor keys. Ted was always willing to share his knowledge over a cup of coffee and took great pride in all his accomplishments. He will always be remembered for his “quick wit” and his answers for everything. Ted loved to socialize and as a young man he enjoyed his annual curling trip to Calgary with the boys. The Acadia Valley sausage fry was another annual event he looked forward to with his many friends. Ted enjoyed gardening, a good game of cards and just an afternoon drive to check the crops with Erika at his side. He will be forever remembered in the hearts of his wife of 55 years, Erika; daughters, Cheryl (Brad) Stenger, Dianne (Cody) Ball, Denise (Rod) Hertz, Lisa Mahura (Ray Langefeld); seven grandchildren, Janelle (Mike) Grover, Nolan (Erica) Ball, Josh Stenger, Jory Stenger, Kandace Hertz, Amanda Hertz, Joleen Hertz, Troy Langefeld and Ethan Langefeld; one very special great-granddaughter, Quinn Grover and his nephew and good friend, Michael Herman. Also left to cherish his memory are his siblings, Don (Maria) Mahura, Chris (Bob) Staples, Bev (Bud) Herman, Bert Mahura, Alouise (Harry) Henderson as well as numerous nieces and nephews. Ted was predeceased by his parents, Louis and Helen Mahura; sister, Phyllis (Charles) Martens; sister-in-law, Kathy Mahura; nephew, Murray Staples and special aunt, Sophie Mahura. Those wishing to pay their respects will have the opportunity to do so one hour prior to the Prayer Service and one hour prior to the Funeral Mass. Vigil Prayers will be recited at Cook Southland Funeral Chapel, 901 – 13 Street S.W., on Monday, May 19, 2014, at 7:00 p.m. The Funeral Mass will be celebrated at Holy Family Parish, 1451 Strachan Road S.E., Medicine Hat on Tuesday, May 20, 2014, at 11:00 a.m., with Reverend Father Matthew Emmelkamp celebrant. Interment will take place at a later date at St. Peter and Paul Cemetery in Acadia Valley. (Condolences may be expressed by visiting www.cooksouthland.com) Memorial donations in Ted’s name may be made directly to the St. Peter and Paul Restoration Fund, c/o P.O. Box 4, Oyen, AB. T0J 2J0 or to the Sacred Heart Parish Building Fund, P.O. Box 629, Oyen, AB. T0J 2J0. Honoured to serve the family is Cook Southland Funeral Chapel, 901 – 13 Street S.W., Medicine Hat, Alberta T1A 4V4 Phone 403-527-6455.

One Condolence for “THEODORE “TED” MAHURA”