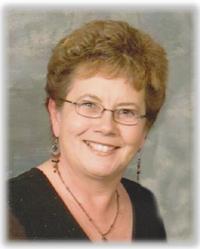 It is with heavy hearts that the family of Bernice Helen Harty, beloved wife of Ron Harty of Etzikom, announce her passing at the Medicine Hat Regional Hospital on Tuesday, May 20, 2014, at the age of 66 years.  Bernice was born November 18, 1947 in Brooks, a daughter to proud parents, Morris and Nina Skrove.  She spent her childhood years in Rolling Hills and this is where she also met her future husband, Ron.  He made their dating official by offering her a black diamond promise ring that she gladly accepted.   They made good of their promise to each other and were married on October 29, 1966 in Rolling Hills.  They purchased a farm from family south of Etzikom and started their lives together.  Not too long after, they purchased more land, moved into Etzikom and built their dream home in 1979.  From this time forward, their hard work was evident as the farm flourished.  Bernice took great pride in her home and meticulously maintained the yard, tended to her garden and raised the kids and paid great attention to the duties of a farm wife.  Family was very important to her – she was the strong woman beside her man and supported her children and grandchildren in all of their activities – she was their #1 fan!  Her sense of community was second to none as she selflessly dedicated herself in various capacities over the years.  Bernice was a lady that was all in – if there was a cause she believed in, she would be the first to exhaust every effort to show support and make things happen.  She was a proud member of Forty Mile Quilting Angels, an organization that makes quilts for patients and families affected by cancer.  Bernice was the kind of lady that put others needs before her own and for this and all of her wonderful qualities, she was truly well liked and an inspiration to others.  For the past five years, Bernice has been ill and since that time the bond between husband and wife grew stronger as Ron took good care of her until the time of her passing.  Bernice’s memory will be cherished in the hearts of her family including her husband of 47 years, Ron;  three sons and their families, Stacy (Diane) and their children, Michaela (Matt) and Colby;  Shaune (Lee) and their children, Peyton, Gerret and Connor;  Darcy (Danielle) and their children, Emily, Max, Elsie and Milo.  She is also survived by a sister, Joyce (Leonard) Lundquist and a brother, Eric (Joy) Skrove as well as numerous nieces, nephews and extended family.  She was predeceased by her parents, Morris and Nina Skrove and a sister, Mary Lou Nielsen.  Those wishing to pay their respects may do so one hour prior to the Prayer Service which will be held at Cook Southland Funeral Chapel, 901 – 13 Street S.W., Medicine Hat on Sunday, May 25, 2014, at 7:00 p.m.  The Funeral Mass will be celebrated at Holy Family Parish, 1451 Strachan Road S.E., Medicine Hat on Monday, May 26, 2014, at 10:30 a.m. with Reverend Father Fred Monk celebrant.  Interment will follow at Hillside Cemetery.  (Condolences may be expressed by visiting www.cooksouthland.com)  Memorial donations in Bernice’s name may be made directly to the Canadian Cancer Society, 102 Crestwood Square One, 1865 Dunmore Road S.E., Medicine Hat, Alberta T1A 1Z8.  Honoured to serve the family is Cook Southland Funeral Chapel, 901 – 13th Street S.W. Medicine Hat, Alberta T1A 4V4 Phone 403-527-6455