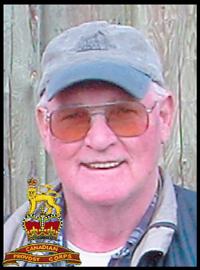 Ken Vair of Medicine Hat passed away on Saturday, May 24, 2014, in the Palliative Care Unit of the Medicine Hat Regional Hospital while surrounded by his wife, children, brothers, sisters and nieces.  Ken was born January 2, 1943, in Lethbridge and raised in Medicine Hat.  Growing up in a family with 10 brothers and sisters prepared him for the Canadian military.  He joined the Provost Corp in 1962, serving at bases in Canada and as part of the First U.N. Peace Keeping Mission to Cyprus.  In 1965, he married Gloria Obrigewitch and in 1967, they returned to Medicine Hat to stay and start their family.  He was employed by Hank Valk Construction and Ben Velner Construction until illness struck in 1989.  He outlasted all doctors’ predictions and survived 25 years until succumbing.  Ken is survived by Gloria, his wife of nearly 49 years;  son, Murray of Calgary;  daughter, Tanya (Stoney) Hines of Drayton Valley and son, Clint of Edmonton;  grandchildren, Delaney, Brody and Kaycee Jay Hines of Drayton Valley;  brothers, Frank (Elaine), Don (Dixie) and Tom (Diane) all of Medicine Hat as well as sisters, Peggy (Mike) Dase of Pincher Creek, Pat Franzen of Medicine Hat, Anna Mae Vair of Calgary, Susan (Henry) Seifried of Brooks and Vicki (Tony) Steidel of Duchess. He was predeceased by his parents, Norman and Marie (McCartney) Vair;  sister, Lillian;  brother, Jim; brother-in-law, Bob Franzen and his in-laws, Matt and Polly Obrigewitch.  The family would like to thank all of the dedicated medical professionals who helped Ken through 25 tough years, especially Dr. Soo for all of his loyalty and support.  A Celebration of Ken’s life will be held at Cook Southland Funeral Chapel, 901 – 13 Street S.W., Medicine Hat on Thursday, May 29, 2014, at 1:00 p.m. with Reverend Father Fred Monk officiating.  Interment will follow in the Field of Honour at Hillside Cemetery.  Flowers are gratefully declined and donations may be made to the Heart and Stroke Foundation of Alberta, 124, 430 – 6 Avenue S.E., Medicine Hat, Alberta, T1A 2S8 or to Parkinson Alberta, 101, 928 Allowance Avenue S.E., Medicine Hat, Alberta, T1A 3G7.  (Condolences may be expressed by visiting www.cooksouthland.com)  Honoured to serve the family is COOK SOUTHLAND Funeral Chapel, 901 – 13 Street S.W., Medicine Hat, Alberta, T1A 4V4.   Telephone:  403-527-6455.

Leave a Condolence for peggy wingenbach