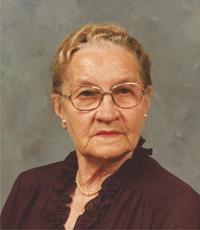 It is with much sadness that we say good-bye to a Brown Owl, Cub Leader, Serving Sister to the Order of St. John of Jerusalem, Charter Member of the SEAPBBA, member of the Canadian Hereford Association, and a champion in getting people into their own home as a realtor in Medicine Hat for many years, not retiring from that profession until she was in her late 80s. Martha Wilhelmina Jussila passed away on Saturday, May 24th, 2014 at Riverview Care Centre at the age of 104 years. Leaving her in legacy are two sons, R.O. Jussila/Merlyn and William; four grandchildren, Aileen, Kathy, Rob and Treena; and great-grandchildren, Stacy, Allison, Jeffery, Daniel, Andrew and Hanna. Martha was predeceased by her husband, Ansgarius; her parents, Robert and Wilhelmina Tenhunen; one daughter, Elsie; brother, Robert Jr.; cousin, John Tenhunen; daughter-in-law, Leah; and one great-granddaughter, Dawn. Martha was born at Astoria, Oregon on November 20th, 1909. The family emigrated to the U.S.A. from Finland before coming to Canada and settling in the Medicine Hat area. They homesteaded in the Manyberries area in 1910. Martha received her education at Manyberries and graduated from Garbutt Business College. In April 1928, she married Ansgarius of Finland. Martha was a nurse at Baptist Haven of Rest from 1960-62, a nurse\’s aide at Dan McCharles Memorial Hospital from 1963-64, and a nurse\’s aide at the Medicine Hat General Hospital from 1967-68. She was a member of the Alberta Wheat Pool, St. John Ambulance, Canadian Girl Guides, and the Medicine Hat Chamber of Commerce. She was also a member of the Lutheran Church in Manyberries for many years. Her hobbies included collecting antiques and writing old-timers stories. A very special thank you and appreciation to Wes, his wife, and the staff at FoodPlus without whose help at times we\’d have gone hungry; to Dawn and her staff at Home Hardware for support way above and beyond the call of duty; and to Len VanMaarion and his wife for their help with finance…we owe you all a debt that can never be fully repaid. Those wishing to pay their respects may do so at SAAMIS MEMORIAL FUNERAL CHAPEL, #1 Dunmore Road SE, on Saturday from 1:00 to 2:00 p.m., on Sunday from 1:00 to 4:00 p.m. and on Monday from 9:30 to 10:25 a.m. as well as at LITTLE KNOLL CEMETERY on Monday from 1:00 to 1:30 p.m. The Funeral Service will be held at SAAMIS MEMORIAL FUNERAL CHAPEL on Monday, June 2nd, 2014 at 10:30 a.m. with Pastor Joe Leavengood officiating. Interment will take place at Little Knoll Cemetery near Manyberries at 1:30 p.m. Memorial gifts in Martha\’s memory may be made to the SPCA, 55 Southwest Drive SW, Medicine Hat, Alberta, T1A 8E8. Condolences may be sent through www.saamis.com or to condolences@saamis.com subject heading Martha Jussila. Funeral arrangements are entrusted to SAAMIS MEMORIAL FUNERAL CHAPEL CREMATORIUM & RECEPTION CENTRE, \”The Chapel in the Park\”, locally owned and directed. Should you wish any additional information, please telephone (403)528-2599