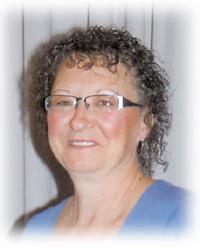 1960 ~ 2014
It is with sadness that the family of Debra Lee Jean ‘Debbie’ Michalezki announce her passing which occurred at the Medicine Hat Regional Hospital on Tuesday, June 17, 2014, at the age of 54 years.  Debra was the faithful partner of Lloyd ‘Butch’ Braconnier, and the beloved daughter of Rosella Michalezki.  She also leaves to cherish her memory:  three children, Melissa, Jason and Amanda (Ryan);  three grandchildren, Jordan, Monique and Liam;  siblings, Rosemary (Arvid), Kenny, James, Gerald and Helené (Peter) as well as numerous nieces, nephews and cousins.  She was predeceased by her father, Paul Michalezki as well as her grandmother, Adeline Baziguri.  Debbie was born in Maple Creek, Saskatchewan on March 28, 1960, to proud parents, Paul and Rosella Michalezki.  Most of her working career was spent as a cook at Argos Restaurant.  Debbie was a very selfless and generous person who loved to cook!  This was evident when anyone stopped by her house for a visit, ‘cause they always left with a full tummy! Debbie always viewed her children and grandchildren as her greatest achievements in life!  She will be deeply missed.  Those wishing to pay their respects may do so at Cook Southland Funeral Chapel, 901 – 13 Street S.W., Medicine Hat on Tuesday, June 24, 2014, between 3:00 p.m. and 6:00 p.m.  A Celebration of Debbie’s life will be held at Cook Southland Funeral Chapel, 901 – 13 Street S.W., Medicine Hat on Wednesday, June 25, 2014, at 2:00 p.m. with Reverend Barrett Scheske officiating.  Interment will follow at Hillside Cemetery with a time of fellowship and refreshments thereafter in the Cook Southland Reception Center.  (Condolences may be expressed by visiting www.cooksouthland.com)  Those wishing to remember Debbie may do so through a donation to the charity of their choice.  Honoured to serve the family is COOK SOUTHLAND Funeral Chapel, 901 – 13 Street S.W., Medicine Hat, Alberta, T1A 4V4.  Telephone:  403-527-6455.