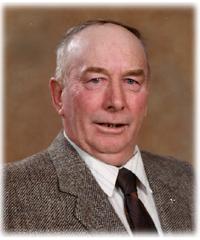 Mr. Jim Pfeifer, beloved husband of the late Mrs. Annie Pfeifer, passed away in Medicine Hat on Saturday, June 28, 2014, at the age of 82 years.  Jim was born in the Graburn area on the family farm South of Walsh, AB., to Jacob and Matilda Pfeifer.  He started school in the Bowell district before moving eight miles East of Medicine Hat (North of Pashley) where he finished his schooling.  Jim helped his father on the farm and also worked for various other ranches in the area, but he was most fond of working with cattle on the P.A. Yeast Ranch.  He was a self taught cook and made many hardy meals for the ranch hands over the years. On June 17, 1967, Jim married Annie Feil and played an important role in the lives of her children.  He worked for Weir Construction on and off for over 25 years until his retirement.  In 1994, Jim received a clock in recognition of his 20 years of service with Weir Construction, a clock he proudly displayed.  His skills as a mechanic and carpenter were evident through his hard work and the two homes he built for Annie.  Jim and Annie enjoyed travelling together following his retirement, especially to the B.C. Coast to visit relatives.  He enjoyed fishing and was a good story teller.  They moved to Chinook Village in 2003 where he resided until his passing.  Jim will be forever remembered in the hearts of his two step-children, Shirley (Norman) Freimark and their daughter, Ruth Freimark (Ben Pasemko) and their son Lucas; Rodney (Debbie) Feil and their children, Jason (Tracey) Feil and son, Weston; Jaime (Shane) Steinkey and son, Carter; Jim’s siblings, Norma (Ivan) Bowen, Florence Leech, Ruth (Louis) Cote and Ruby Williamson (twin sisters) as well as numerous nieces and nephews.  He was predeceased by his wife, Annie Pfeifer; parents, Jacob & Matilda Pfeifer; brother, Bert Pfeifer and brothers-in-law, Garnet Leech and Gordon Williamson.  The family will honour Jim’s life with a private family graveside service.  There will be a memorial luncheon at Cook Southland Reception Center, 901 – 13 Street S.W., Medicine Hat, on Wednesday, July 9, 2014 at 2:00 p.m.  If friends so desire, memorial tributes in memory of Jim may be made directly to the Canadian Diabetes Association, 102, 73 – 7 Street S.E., Medicine Hat, AB., T1A 1J2.  (Condolences may be expressed by visiting www.cooksouthland.com)  Honoured to serve the family is COOK SOUTHLAND Funeral Chapel, 901 – 13 Street S.W., Medicine Hat, Alberta, T1A 4V4.  Telephone:  403-527-6455.