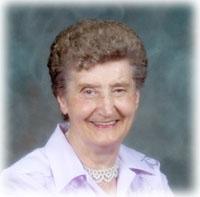 October 8, 1921 ~ June 22, 2014
Philippine (Phyllis) Rosella Harty (nee Tumback) was born on October 8, 1921, in Sceptre, SK., and left this world to be with Jesus on June 22, 2014, at the age of 92 years.  She was the youngest of six children to Joseph and Mary Tumback.  Her siblings were John, George (Jacobina) Tumbach, Matthew (Elizabeth) Tumbach, Simon (Barbara) Tumbach and Helen (Frank) Hopfauf.  Phyllis married Anton Harty on October 3, 1949.  They had 49 wonderful years of marriage before he passed away in 1998.  Together they worked and farmed in the Faith / Hoping District, raising five children.  Phyllis was a good mother and homemaker.  She raised chickens and turkeys, milked cows and grew many gardens.  Everything she cooked was homemade, and she was known for her baking skills.  Rarely would anyone stop by the farm and not get a fresh bun, noodles, a cinnamon bun or kuchen that she had baked.  She was a C.W.L. member in her church for 65 years.  Her strong faith brought her through many trials in life, including breast cancer.  Her pride and joy came from spending time with her family, especially her children and grandchildren including cooking and baking for them all!  Phyllis was predeceased by her husband, Anton;  daughter, Mary;  son, Jerome;  infant great-grandson, Jeffery Michael Harty as well as all of her siblings and her parents.  She is survived by her son, Brendan (Wendy) of Milk River;  son, William of Coutts;  daughter, Loretta of Medicine Hat;  son-in-law, Roger Carrier;  eight grandchildren and seven great- grandchildren.  She is also survived by a brother-in-law, Gabriel Ehnes and her sister-in-law, Elizabeth Tumbach.  Vigil Prayers will be recited at Cook Southland Funeral Chapel, 901 – 13 Street S.W., Medicine Hat on Monday, July 7, 2014, at 7:00 p.m. with Reverend Father Fred Monk reciting.  Funeral Mass will be celebrated at Holy Family Parish, 1451 Strachan Road S.E., Medicine Hat on Tuesday, July 8, 2014, at 11:00 a.m. with Reverend Father Fred Monk celebrant.  Private Interment will follow at Hillside Cemetery. (Condolences may be expressed by visiting www.cooksouthland.com)  If friends so desire, memorial tributes in memory of Phyllis may be made to the Bow Island LTC or to the charity of one’s choice.  Honoured to serve the family is Cook Southland Funeral Chapel, 901 – 13th Street S.W. Medicine Hat, Alberta T1A 4V4 Phone 403-527-6455