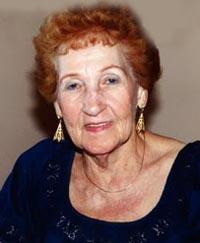 Ella (Bueckert) Aitken passed away peacefully at the Medicine Hat Regional Hospital on Friday, July 11th, 2014. Ella leaves to mourn her passing four children, Barry (Norma) Bueckert, Lorna (Lloyd) Veenstra, Greg (Shelly) Bueckert and Chris Weiss; seven grandchildren; six great-grandchildren; one sister, Norma Genert; one sister-in-law, Betty Rempel; as well as numerous nieces and nephews. Ella was predeceased by her parents, Rudolph and Annetta Weiss; three sisters, Lydia Gerein, Esther Guminy and Helen Bliss; one brother, Lenard Weiss; her first husband, Edward Bueckert; and her second husband, Elmer Aitken. Ella was born in Kuest, Saskatchewan and moved to Schuler, Alberta with her family when she was four years old. She moved to Medicine Hat as a teenager to care for her ailing grandmother. It was there she met Edward Bueckertwhom she married in 1940. She and Ed owned and operated Redcliff Building Supply Company until Ed\’s passing in 1975. Ella also worked at the Redcliff Greenhouses for a number of years tending to the roses. Ella travelled extensively after Ed\’s passing and moved to Veinervillein 1989. She married Elmer Aitken in 1995. Ella was a loving mother, grandmother and great-grandmother. She enjoyed bowling, travelling, reading, playing darts, going to bingo, and spending time with her family. She was always supportive and encouraging and will be sorely missed by her family. A Celebration of Ella’s Life will be held at Christ TheKing Assembly, 1101 Queen Street SE, on Wednesday, July 23rd, 2014 at 2:00 p.m. with Pastor Mark Borrows officiating. Memorial gifts in Ella\’s memory may be made to the Alberta Heart & Stroke Foundation, #124, 430 – 6th Avenue SE, Medicine Hat, Alberta, T1A 2S8. Condolences may be sent through www.saamis.com or to condolences@saamis.com subject heading Ella Aitken. Funeral arrangements entrusted to SAAMIS MEMORIAL FUNERAL CHAPEL CREMATORIUM & RECEPTION CENTRE, \”The Chapel in the Park\”, locally owned and directed. Should you wish any additional information, please telephone (403)528-2599