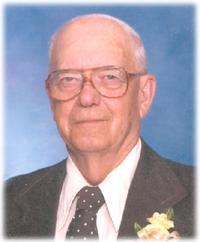 1920 ~ 2014
Mr. Leonard R. Winkler, beloved husband of Mrs. Margaret Winkler, passed away peacefully at the Medicine Hat Regional Hospital on Wednesday, July 23, 2014, just shy of his 94th birthday. Left behind to cherish his memory are his children, Leslie (Vicki), Reginald, Timothy and Bruce (Connie) and their children, Ariel and Kailye;  sisters, Dorothy and Evelyn and brothers, Dave and Donald.  He was predeceased by a son, Dennis in 1987;  parents, Susanna and Theodore;  sisters, Frieda and Pauline and a brother, Walter.  Leonard was born in Big Stick District, Saskatchewan on August 7, 1920.  He married Margaret Huber on April 10, 1942 before he left to serve in the army during WWII.  Upon his return to Golden Prairie, he farmed for the next two years before moving to Medicine Hat in 1947.  He had a lengthy career in radio and tv repair and mobile communications.  He retired from R&W Electronics in 1985.  He was a long time member of the Hat Ham Radio Club.  Leonard enjoyed amateur radio (VE6ALA), wood working, watching sports and visiting with his coffee buddies before his stroke in 2012.  A private family service in honour of Leonard’s life will be held.  (Condolences may be expressed by visiting www.cooksouthland.com)  Honoured to serve the family is COOK SOUTHLAND Funeral Chapel, 901 – 13 Street S.W., Medicine Hat, Alberta, T1A 4V4.  Telephone:  403-527-6455.