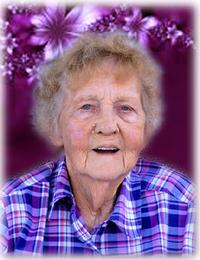 1927 ~ 2014
With her family by her side, Mrs. Vernie Bernice Ferguson passed away peacefully while at the Medicine Hat Regional Hospital on Thursday, August 14, 2014, at the age of 87 years.  Vernie was born in Admiral, Saskatchewan and spent many years in Swift Current, Saskatchewan before moving to Medicine Hat in 1986.  Family meant the world to her and she enjoyed spending time with her children, grandchildren and great- grandchildren.   She leaves her husband of 59 years, Frog (Allan) Ferguson and their three children:  Donna (Gary) Schneider and their children, Jennifer (Joe) Steier, Aaron (Kate) Schneider and Haylee Schneider;  Peggy (Thomas) Tuchscherer and their children, Travis Tuchscherer and Tanis (Mitch) Tuchscherer;  Darcy Ferguson and his children, Drew and Drake (Laura) Ferguson;  great-grandchildren, Sydney and Ryann Steier, Mack and Allegra Schneider.   Vernie’s life will be celebrated at Cook Southland Funeral Chapel, 901 – 13 Street SW on Monday, August 18, 2014, at 1:00 p.m. with Reverend Barrett Scheske officiating.  Private family interment will follow at Hillside Cemetery.   (Condolences may be expressed by visiting www.cooksouthland.com)  Memorial donations in Vernie’s name may be made directly to the Canadian Cancer Society or to the Heart & Stroke Foundation of Alberta. Honoured to serve the family is Cook Southland Funeral Chapel, 901 – 13th Street S.W. Medicine Hat, Alberta T1A 4V4 Phone 403-527-6455