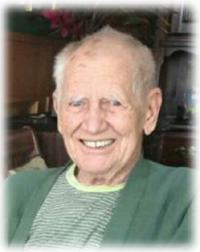 1925 ~ 2014
On Monday, September 1, 2014, Melvin Oscar Hofer passed away peacefully at the age of 88 years.  He is survived by Anna, his wife of 59 years;  children, Melanie, Michael, Pam and Leah (Don);  grandchildren, Eric, Emily, Alanna and Maddie;  sister, Goldie as well as many nieces and nephews.  Mel was born in Leader, Saskatchewan, but lived much of his life in Medicine Hat where he was first a teacher and later a realtor.  A devoted husband and loving father, he was gentle man whose family was the center of his life.  His wisdom and compassion will be missed by his family and those who knew him.  Mel was interred at Hillside Cemetery following a private family service.  (Condolences may be expressed by visiting www.cooksouthland.com)  Memorial donations in Melvin’s name may be made directly to St. Joseph’s Home – Carmel Hospice, 156 – 3rd Street N.E., Medicine Hat, Alberta, T1A 5M1.    Honoured to serve the family is Cook Southland Funeral Chapel, 901 – 13th Street S.W. Medicine Hat, Alberta T1A 4V4 Phone 403-527-6455