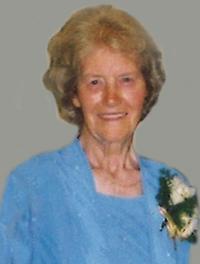 It is with great sadness we announce the passing of Pearl Rodermond who went to be with the Lord on Wednesday, September 10, 2014 at the Red Deer Regional Hospital with her family by her side.
Pearl was born April 16, 1925 in Gieten, Holland to Arend and Henrietta Aasman.
She immigrated to Canada in 1953. She married James (Jim) Rodermond August 9, 1954. They lived and farmed in Medicine Hat, Alberta where their three children were born. Janet in 1955, Ernie in 1957 and Michael in 1961. Then Jim, Pearl and family moved to Leslieville, Alberta in 1965 where she lived until her passing.
Pearl enjoyed having her family home for special occasions, she liked to do traditional cooking and baking mixed in with some Dutch traditions, which we all enjoyed very much. She loved her beautiful yard and enjoyed her flowers, always having fresh flowers on the table. Pearl and Jim enjoyed travelling the world and went on many vacations with friends or family or both. They also enjoyed their snow birding experience to the States for 20 plus years. On August 9th 2014 Pearl and Jim celebrated their 60th Anniversary. Sharing this day with her family was a momentous occasion for her.
Pearl is survived by her husband of 60 years James Rodermond, her daughter Janet (Brian) and grandchildren Katrina, James and Jessica of Medicine Hat, her son Ernie (Judy) of Leslieville; her sisters; Jeanette (Luke) Brouwer of Lethbridge, Betty (Homer) Oudman of Taber, Jean (John) Brouwer of Rocky Mountain House, and Elly Wenzel of Medicine Hat; her brothers Robert (Nell) Aasman of Rocky Mountain House, Hank (Gerda) Aasman of Medicine Hat and Bill Aasman of Medicine Hat; sisters-in-Law, Ina (C) Aasman, Ina (J) Aasman and Mary (Jim) Reaves of Kelowna; brothers-in-law, Henk (Aavina) Rodermond of Medicine Hat, Mark (Ann) Rodermond of Medicine Hat and Bill (Jane) Navis of Sherwood Park.
She was predeceased by her son Albert Michael in 2004; her parents Arend and Henrietta Aasman, her brothers Casey, Johnny, James and Mark Aasman as well as brothers-in-law Rueben Wenzel and Fred Rodermond and sisters-in-law Jackie Aasman, Tina Aasman and Alice Navis.
A Funeral Service will be held at The First Christian Reformed Church, Rocky Mountain House, on Saturday September 20, 2014 at 1:00 P.M. Following a private family interment at the Leslieville Cemetery , friends are cordially invited to join the family for a time of fellowship and refreshments at the Leslieville Community Center.
As an expression of sympathy memorial donations, in memory of Pearl, may be made to the Heart and Stroke Foundation of Alberta or the First Christian Reformed Church Memorial Fund.
Condolence may be forwarded to www.rockyfuneralhome.ca
Rocky and Sylvan Lake Funeral Homes and Crematorium, your Golden Rule Funeral Homes, in trusted with the arrangements.