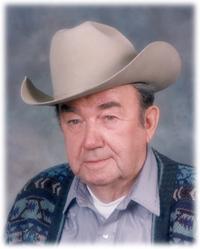 1922 ~ 2014
Emil Kuntz, beloved husband of Elsie Kuntz, passed away at the Medicine Hat Regional Hospital on Monday, September 15, 2014, at the age of 92 years.  Emil was born on May 3, 1922 in Richmound, Saskatchewan and this is also where he was raised and grew up.  Emil was a man of great character and wore many different hats throughout the years, however, he worked as a trucker for most of his life.  He enjoyed the outdoors and liked to go camping, fishing, playing cribbage and loved doing wonderword puzzles.  Emil will be deeply missed by his wife Elsie;  two daughters:  Brenda (Arnold) Martinson and their two children, Jessica and Graydon (Kristina) and their son, Gage;  and Sherry (Tony) Morrison as well as numerous nieces and nephews.  He was predeceased by his parents, Frank and Margaretta Kuntz and eleven siblings.  Emil’s life will be celebrated at Cook Southland Funeral Chapel, 901 – 13 Street S.W., Medicine Hat on Thursday, September 18, 2014, at 11:00 a.m. with Deacon Terry Olson officiating.  Interment will follow at Hillside Cemetery and thereafter a reception will take place in the Cook Southland Reception Facility.  (Condolences may be expressed by visiting www.cooksouthland.com)  Memorial donations in Emil’s name may be made directly to the Salvation Army, 164 Stratton Way S.E., Medicine Hat, Alberta, T1B 3R3.  Honoured to serve the family is Cook Southland Funeral Chapel, 901 – 13th Street S.W. Medicine Hat, Alberta T1A 4V4 Phone 403-527-6455

One Condolence for “EMIL KUNTZ”