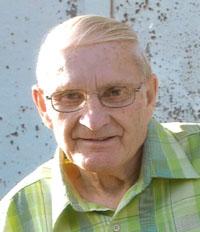 Martin \”Roy\” Carter of Medicine Hat, beloved husband of the late Shirley Carter, passed away on Thursday, September 18th, 2014 at the age of 78 years. Roy leaves to cherish his memory his daughters, Rhonda (Ron) Wilson of Medicine Hat and Lisa (Steven) Carless of Strathmore; four grandchildren, Kelcie and Kennedy Wilson, Delaney and Shane Carless; numerous nieces and nephews; and special friend, Maxine Stockberger. Roy was predeceased by his wife, Shirley in 2005; his parents, Stanley and Kathleen Carter; two sisters, Joyce Gehring and Dorothy Woyciehouski; and two brothers, Lloyd and Albert Carter. Roy was born on July 19th, 1936 in Provost, Alberta and began working with AGT in 1956. In June 1962, he transferred to Banff but returned to Medicine Hat in May of 1963. Roy married Shirley Firus on February 8th, 1964. He was a boy scout leader volunteering and selling Christmas trees. Roy was also the President of the Medicine Hat Figure Skating Club and worked at the Crescent Heights Car Wash and especially enjoyed attending his grandchildren\’s ringette games, gymnastics competitions, and soccer games. He moved to his River Ridge condo in July of 2012. Roy was very handy and was considered to be a “Mr. Fix It” who wasn’t afraid to try anything. He enjoyed being in his workshop, building small projects, and genealogy. He was recently the equipment manager of the Medicine Hat Ringette Association. Roy will be greatly missed by his family and friends. Those wishing to pay their respects may do so at SAAMIS MEMORIAL FUNERAL CHAPEL, #1 Dunmore Road SE, on Friday from 7:00 to 9:00 p.m. and at the CHURCH OF JESUS CHRIST OF LATTER-DAY SAINTS, 1865 Division Avenue North, on Saturday from 12:00 to 12:45 p.m. The Funeral Service will be held at the CHURCH OF JESUS CHRIST OF LATTER-DAY SAINTS on Saturday, September 27th, 2014 at 1:00 p.m. with Bishop George Schow presiding. Interment will follow in the Family Plot at Hillside Cemetery. Memorial gifts in Roy\’s memory may be made to the U of C Libin Institute, Faculty of Medicine Fund Development, Health Sciences Centre, 3330 Hospital Drive NW, Calgary, Alberta, T2N 4N1, c/o Libin Institute work by Dr. Kidd. Condolences may be sent through www.saamis.com or to condolences@saamis.com subject heading Roy Carter. Funeral arrangements are entrusted to SAAMIS MEMORIAL FUNERAL CHAPEL CREMATORIUM & RECEPTION CENTRE, \”The Chapel in the Park\”, locally owned and directed. Should you wish any additional information, please telephone (403)528-2599