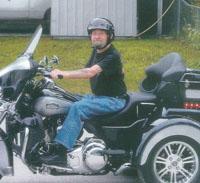 Born February 15, 1935 in Swift Current SK, Dirk passed away on September 19, 2014 at the age of 79 years. Dirk was a pilot and also worked for the Alberta Oil Sands Environmental Research Program. He enjoyed riding his Harley’s and was an active member of the Model Aircraft Assoc. of Canada, Lions Club, Royal Canadian Legion and the West Kelowna Yacht Club. Sadly, he was predeceased by his wife June in 1998, his parents Vic and Thelma, mother-in-law Winnie Booth and his brother-in-law Walter Knol. Dirk will be greatly missed by his children; Darwin (Penni), Deb, Darcy, Denton (Tanya) and their families. He will also be missed by his siblings Del (Marian) his sister Cheri Knol, brothers-in-law George Booth and Doug Booth. A Celebration of Life was held on September 27, 2014. Messages of condolence may be sent to the family by visiting www.HansonsFuneral.ca