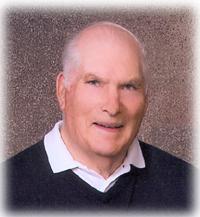 1933 ~ 2014
On Thursday, October 2, 2014, Mr. George Andrekson, beloved husband of Mrs. Joan Andrekson, quietly passed away while surrounded by his family at St. Joseph’s Home Carmel Hospice in Medicine Hat at the age of 81 years. George was born on June 22, 1933 and raised on the family farm in Barons, Alberta. He attended Barons?Consolidated School to grade 12 and then took a year of post secondary education at the University of Alberta. George and Joan were married on July 6, 1957 in Lethbridge and  raised their children on the family farm. George was a kind, patient, trustworthy, humorous, quick witted man and a loving husband, father and grandfather. He enjoyed fishing, hunting, reading, camping and his favorite sports included  curling, hockey, golf and baseball of which he enjoyed watching and was an excellent player in his day. He was a member of the Elks, Legion, the Barons Curling Club and served on the United Church board for many years. George loved his cows and was very proud of his farm. Besides his loving wife, Joan, George leaves to cherish his memory his three children: Jackie (Mitch) Mifflin, Brad   (Leanne) Andrekson and Sue (Derwin) Larock; three grandsons: Justin and Jeremy Andrekson, and Logan Larock as well as his step-grandchildren, Chad and Chelsey.  George was predeceased by his parents, George and Seraphima; two sisters, Lydia Wolloschuk, Mary-Lou Baczuk and one brother, Alexander Andrekson. The Funeral Service will be held at the Southminster United Church, 1011 – 4th Avenue South, Lethbridge,?Alberta on Wednesday, October 8, 2014 at 2:00 p.m. If friends so desire, memorial donations in George’s name may be made directly to M.S. Society, 101, 1201 Kingsway Avenue S.E., Medicine Hat, AB., T1A 2Y2.   Condolences may be expressed by visiting www.cooksouthland.com)  Honoured to serve the family is Cook Southland Funeral Chapel, 901 – 13th Street S.W. Medicine Hat, Alberta T1A 4V4 Phone 403-527-6455

One Condolence for “GEORGE ANDREKSON”