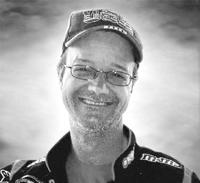 January 30, 1971 – Michel, BC
September 28, 2014 – Calgary, AB
Christopher Harper beloved husband of Janis Baron of Brooks AB, passed away on Sunday, September 28, 2014 at the age of 43 years.
Chris was born in Michel, British Columbia and was raised in Victoria, BC. Chris was in the Army Reserves and moved to Alberta, where upon leaving the Reserves, worked in Brooks at Lakeside Packers, drove for Trican Well Services, then became a rendering supervisor at JBS Canada. Chris was very passionate about Hockey, being a huge Vancouver Canucks fan. He was also a big fan of the Brooks Bandits, seldom missing a game. Family was very important to Chris. He was a loving son, brother, husband, father and friend, and he always made a point to keep in touch, without having an occasion to call. He was a loving and devoted husband, father and friend who could brighten anyone’s day with his infectious smile and sense of humour.
Christopher is survived by his mother and step father, Jacki and Frank Kuchta of Kamloops, BC; father and step mother, Wayne and Laura Harper of Quesnel, BC; twin brother and sister-in-law, Ronald and Christine Harper of Medicine Hat, brother and sister-in-law; Ronan and Jackie Harper of Edmonton; uncle Chris Dawson of Port Coquitlam, BC; son, Matheu Harper of Medicine Hat, and his loving wife, Janis.
He was predeceased by grandparents.
A Celebration of Chris’s life will be held at a later date in Brooks. Forward condolences through www.hffs.com.
If friends so desire, memorial tributes in Chris’s memory may be made directly to the Brooks Bandits Hockey Team, Box 196, Brooks, AB, T1R 1B3
HERITAGE FUNERAL SERVICES “Heritage Funeral Home”
Telephone: 299-0100