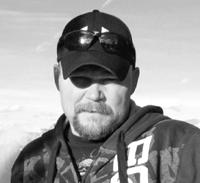 March 20, 1967 – October 1, 2014
John Thomas “Bronc” Bootland, beloved husband of Debbie Bootland (nee Dowie) of Airdrie, AB, passed away on Wednesday, October 1, 2014 at the age of 47 years.
John was a Journeyman steamfitter and pipefitter. He was a hardworker and well-respected by his colleagues. John enjoyed family time and watching his boys’ sports. Early in life, he participated in wrestling, football and rodeo. A big kid himself, John was a kid magnet and was notorious for his teasing and jokes. John’s greatest achievement was his family and he cherished spending time with them at the cabin in Pigeon Lake. He loved his Captain Morgan and mixed a mean Paralyzer. John also enjoyed travelling with his family, with his latest trip being to Las Vegas in September 2014 to celebrate their eleventh anniversary.
Besides his loving wife Debbie, John is survived by his sons, Teigan and Jesse; mother Evelyn Bootland; mother and father-in-law Jim and Marie Dowie; and siblings, Shelly Bootland (Dan Roseveare), Karen Bootland Todoruk, Steve (Tanya) Dowie, Keith Dowie, and Dawn (Darrell) Wutzke. He is also survived by his nieces and nephews, Eric and Emma Dowie, Kayli Dowie, Dan, Chris and Jacob Wutzke, and Maguire and Kalum Todoruk and Ocianna Roseveare; his dogs Mojo and Smudge; and numerous extended family and friends.
John was predeceased by his grandparents and his father John “Scotty” Bootland.
A Celebration of John’s Life will be held at McINNIS & HOLLOWAY (Chapel of the Bells, 2720 Centre Street North, Calgary, AB) on Friday, October 10, 2014 at 2:00 p.m. Condolences may be forwarded through www.mcinnisandholloway.com
In lieu of flowers, memorial tributes in John’s honour may be made directly to the charity of the donor’s choice.
In living memory of John Bootland, a tree will be planted at Fish Creek Provincial Park by McINNIS & HOLLOWAY FUNERAL HOMES, Chapel of the Bells, 2720 CENTRE STREET NORTH, Calgary, AB T2E 2V6, Telephone: 1-800-661-1599.