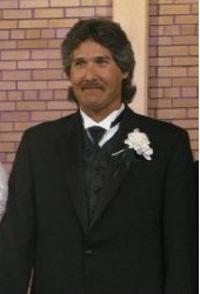 January 22, 1968 – October 10, 2014
Jack was born and raised in Medicine Hat. He spend many years on a gravel crusher with his best friends Ron Sadler and Glen Sadler and where he was able to teach his sons how the crusher ran. In doing so he was able to work with them for many years, Jack also drove long haul for a number of years. His pastimes usually involved his family, playing golf with Charlie and the boys, spending time under the hood of vehicles and many times this was with the boys; but I think his favourite times were when he went quading with his boys and his grandson Calibur.
Jack is survived by his wife Rose, his children Timothy (Priscilla), Christopher (Christina), Joshua (Brittany), Curtis and Austin; his grandchildren Jayla, Davion, Quinn, Mya, Davon, Calibur and Levi; his other children who called him “Dad” Cameron and Scott; James, Chelsea and Yvonne; in-laws Ronald (Benita) Caskey, brother-in-law Samuel (Christina) Caskey; nephew Matthew; nieces Samantha, Jade, Medow, Jordyn and Taylor; uncle Bill (Joyce) Brotzell; cousin Jennifer Millen and family.
Jack lived a short life but it was a full life because of the family and friends he had.
Donations may be made to the Canadian Lung Association in honor of Jack. A service will not be held at this time; a celebration of Jack’s life will be announced at a later date.