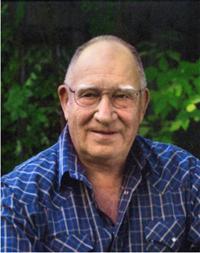 William \”Bill\” Flaig of Medicine Hat, beloved husband of the late Bernice Flaig, passed away on Wednesday, October 15th, 2014 at the age of 83 years. Bill leaves to cherish his memory his daughter, Kathy Flaig (David Yates) of Medicine Hat; nieces and nephews, Terry (Jim) Hogg, Grant (Tracey) Flaig, David (Lynn) Flaig and Kelly (Jan) Flaig; sister-in-law, Carmen Flaig; two brothers-in-law, Bob (Maggie) Seitz and Garth (Marilyn) Seitz; as well as numerous cousins. Bill was predeceased by his parents, John and Theresa Flaig; and one brother, Jim Flaig. Bill was born on May 7th, 1931 in Medicine Hat. He farmed and ranched for many years before moving to Medicine Hat in June 2011. Bill loved spending time with his family and friends and will be deeply missed by all those who knew and loved him. Those wishing to pay their respects may do so at SAAMIS MEMORIAL FUNERAL CHAPEL, #1 Dunmore Road SE, on Sunday, October 19th, 2014 from 7:00 until 9:00 p.m. A Private Graveside Service will be held on Monday, October 20th, 2014 with Gary W. Goran officiating. Memorial gifts in Bill\’s memory may be made to St. Joseph\’s Home (Carmel Hospice), 156 – 3rd Street NE, Medicine Hat, Alberta, T1A 5M1. Condolences may be sent through www.saamis.com or to condolences@saamis.com subject heading Bill Flaig. Funeral arrangements are entrusted to SAAMIS MEMORIAL FUNERAL CHAPEL CREMATORIUM & RECEPTION CENTRE, \”The Chapel in the Park\”, locally owned and directed. Should you wish any additional information, please telephone (403)528-2599

Leave a Condolence for tracy g