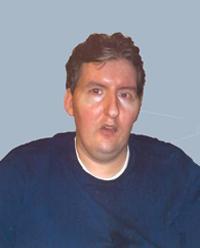 Craig Major of Medicine Hat,passed away peacefully with his parents by his side on Tuesday, October 14th, 2014 at the age of 44 years. Craig leaves to cherish his memory his mother, Sharon Major (nee Huston); his father, Ken (Judy) Major; one brother, Kent Major; one sister, Patricia Major; one step sister, Rhonda Major; his niece, Ashley Major, whom he helped raise as if she were his own daughter; and four great nieces and nephews, Raheem, Malikah, Nadia, and Ada. Craig was predeceased by his grandparents. Craig suffered a severe head injury in a work-related accident. He struggled with many setbacks but always maintained his sense of humourand his love of sports. Craig will be greatly missed by all those who knew and worked with him. The Funeral Service will be held at SAAMIS MEMORIAL FUNERAL CHAPEL, 1 Dunmore Road SE, on Saturday, October 18th, 2014 at 1:30 p.m. with Gary W. Goran officiating. Interment will take place at Graysville Cemetery in Manitoba at a later date. In lieu of flowers, memorial gifts in Craig\’s memory may be made to the Brain Injury Rehabilitation Services, 856 Allowance Avenue SE, Medicine Hat, Alberta, T1A 7S6, or you may choose to plant a tree or shrub in Craig\’s memory. Condolences may be sent through www.saamis.com or to condolences@saamis.com subject heading Craig Major. Funeral arrangements are entrusted to SAAMIS MEMORIAL FUNERAL CHAPEL CREMATORIUM & RECEPTION CENTRE, \”The Chapel in the Park\”, locally owned and directed. Should you wish any additional information, please telephone (403)528-2599