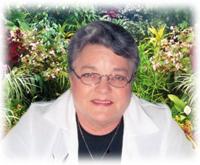 It is with heavy hearts that the family of Patricia Phyllis Massine, beloved wife of Alphonse Massine, announce her passing at the Medicine Hat Regional Hospital on Friday, October 31, 2014, at the age of 74 years.   Patricia was born and raised in Medicine Hat, attending Yuill Street Elementary School, Alexandra Junior High School and graduated from Medicine Hat High School.  She married Alphonse Massine in Great Falls, Montana, on July 1, 1960.  Together they resided in Redcliff for 51 years before living the last 3 1/2 years in Medicine Hat.  She was an exceptional florist and worked for Redcliff Greenhouses for 32 years.  Pat’s adventurous nature took her on many outings which included numerous camping trips and holidays.  She relished in each opportunity to support her children with their activities, including swimming and various other sports, Girl Guides and Brownies.  Pat enjoyed sewing, cross stitching, baking and cooking as well as gardening and crafts.  She also enjoyed time spent relaxing, whether reading a good book or sitting back to listen to some of her favorite music… Elvis.  Pat was an avid dog lover.  She was a giving and patient person, but also a force to be reckoned with when she was mad.  She was an Associate Member of the Redcliff Royal Canadian Legion, Branch #6.  Special memories for Pat would include the birth of her children, grandchildren and great-grandchildren as well as her 50th wedding anniversary celebration.  She was a loving and caring wife, mother and grandmother who will be forever remembered in the hearts of her family:  husband, Al;  two daughters, Terry and Vicki (Kirk);  two sons, Kelly (Rose) and Michael (Wendy);  seven grandchildren and two precious great-grandchildren;  two brothers and a sister;  five sisters-in-law and four brothers-in-law as well as numerous nieces, nephews, great-nieces and great-nephews.  Pat was predeceased by her parents;  mother-in-law and?father-in-law;  one brother;  two sisters and two brothers-in-law.  Those wishing to pay their respects may do so at Cook Southland Funeral Chapel, 901 – 13 Street S.W., Medicine Hat on Thursday, November 6, 2014, between 7:00 p.m. and 8:00 p.m.  A Celebration of Pat’s life will be held at Cook Southland Funeral Chapel on Friday, November 7, 2014, at 11:00 a.m. with Life Celebrant Gerry Getz officiating.  A time of fellowship and refreshments will follow the service in the Cook Southland Reception Facility with interment thereafter in the Field of Honour at the Redcliff Cemetery.  (Condolences may be expressed by visiting www.cooksouthland.com)  If friends so desire, tributes in memory of Pat may be made directly to the Alberta Lung Association, P.O. Box 24017, Station South, Edmonton, Alberta,  T6E 9Z9.  Honoured to serve the family is Cook Southland Funeral Chapel, 901 – 13th Street S.W. Medicine Hat, Alberta T1A 4V4 Phone 403-527-6455

One Condolence for “PATRICIA PHYLLIS MASSINE”