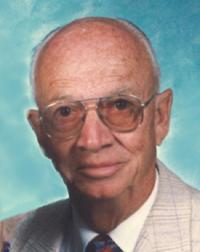 Dr. Jack Edwards of Medicine Hat, beloved husband of the late Margaret Edwards, passed away on Sunday, November 9th, 2014 at the age of 93 years. Jack leaves to cherish his memory his sons, Ronald \”Ron\” (Anne) Edwards and Kenneth \”Ken\” (Margriet) Edwards, both of Medicine Hat; his daughter, Lorraine (Kenneth \”Ken\”) Gassoff of Quesnell, BC; four grandchildren, Cody (Amie) Edwards, Kayla (Garrick) Powell, Curtis Gassoff, and Heather (Scott) Osadczuk; and six great- grandchildren. Besides his wife, Margaret, Jack was predeceased by his parents, Lewis and Ella Edwards. Jack was born on November 14th, 1920 in Grande Prairie. He graduated with a B.Sc. Degree in 1943, a M.D. Degree in 1946, and a M.Sc. Degree in 1953. Jack served in the Medical Corps of the Canadian Army from 1944 to 1945 and married Margaret Crawford Gainer on September 15th, 1945 in Edmonton. Jack began a general practice in Red Deer from 1946 to 1951 and then continued his education in Edmonton training in Internal Medicine. In 1955, Jack and Margaret settled in Medicine Hat where he practiced until retiring in 1988. Jack was an Alderman for the City of Medicine Hat from 1958 to 1968, was President of the Chamber of Commerce, President of the Medicine Hat & District Tourism Association, President of the Kiwanis Club, and member of the Kiwanis Band from 1955 to 1985. He was also President of the Alberta Medical Association and was on many committees with the Alberta Medical Association and the College of Physicians of Surgeons. Jack and Margaret enjoyed many winters in Arizona. He will be greatly missed by his family and friends. The Funeral Service will be held at SAAMIS MEMORIAL FUNERAL CHAPEL, #1 Dunmore Road SE, on Tuesday, November 18th, 2014 at 11:00 a.m. with Reverend Canon D. Gene Packwood officiating. A Private Interment will take place at Saamis Prairie View Cemetery. Friends are invited to a Come & Go Reception at Saamis Creekside Centre, Saamis Memorial Funeral Chapel, following the funeral service. Memorial gifts in Jack\’s memory may be made to the charity of one\’s choice. Condolences may be sent through www.saamis.com or to condolences@saamis.com subject heading Jack Edwards. Radio funeral announcement can be heard on Monday around 11:35 a.m. on 93.7 Praise FM. Funeral arrangements are entrusted to SAAMIS MEMORIAL FUNERAL CHAPEL CREMATORIUM & RECEPTION CENTRE, \”The Chapel in the Park\”, locally owned and directed. Should you wish any additional information, please telephone (403)528-2599