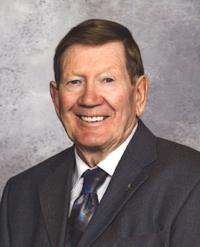 Robert Gordon Johnson, beloved husband of Loretta Johnson of Medicine Hat, passed away peacefully on Wednesday, November 12th, 2014 at the age of 79 years. Bob was born in Alsask, Saskatchewan on August 20th, 1935, the sixth of seven children born to Grant and Edith Johnson. He farmed in the Cuthbert area until retiring to Medicine Hat in 2006. Bob was an active member of the community being involved in the Lions Club, church, and school board as trustee and chairman for many years. He was also the Mayor of Alsask and was instrumental in the development of the Alsask Retirement Villa. Bob loved music, whether it was the barbershop quartet, the band \”Tequila Sunrise\”, or just playing for family. He loved singing and we all enjoyed his rich bass voice. Spending time with family and friends was very important to him and he especially loved his grandkids. Bob is survived by his wife of 57 years, Lori; his daughter, Janice (Doyle) Duncan and their children, Josh (Monica), Maddie (Brennan) and Zach; and his daughter, Bobbie Jo (Wayne) Wulf and their children, Sydney and Gianna. He also leaves to cherish his memory two sisters, Joyce Nelson and Norma Muirhead; two brothers, Allan (Grace) and Wayne (Darlene); one brother-in-law, Andrew Nagel; as well as nieces, nephews, great-nieces and great-nephews. Bob was predeceased by his parents, Grant and Edith; his brothers, Ivor and Earl (Elsie); his brothers-in-law, Murdock Nelson, Peter Muirhead, Harvey (Jenny) Nagel and Ken (Eleanor) Nagel; his father and mother-in-law, Paul and Lil Nagel; his nephew, Michael Johnson; and his nieces, Shirley Johnson and Krista Scheuerman. A Celebration of Bob\’s Life will be held at the SAAMIS CREEKSIDE CENTRE, #1 Dunmore Road SE, on Monday, November 17th, 2014 from 1:00 to 3:00 p.m. with Gary W. Goran officiating. Memorial gifts in Bob\’s memory may be made to The Arthritis Society, Alberta and NWT Division, #300, 1301 – 8th Street SW, Calgary, Alberta, T2R 1B7, or to the Charity of One\’s Choice. Condolences may be sent through www.saamis.com or to condolences@saamis.com subject heading Bob Johnson. Funeral arrangements are entrusted to SAAMIS MEMORIAL FUNERAL CHAPEL CREMATORIUM & RECEPTION CENTRE, \”The Chapel in the Park\”, locally owned and directed. Should you wish any additional information, please telephone (403)528-2599