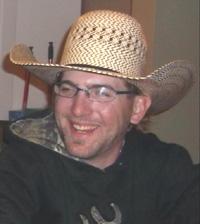 Kirby Austin Lust passed away Saturday, November 8th, 2014 at the age of 25 years. He used every ounce of his bullfighter strength to try to come back to his family and friends after the accident. Kirby is survived by the pride of his life, his son, Ryder Oczkowski; his parents, Kim and Shelly Lust; brother, Tyrone Lust (fiancé, Ava Stasiuk); girlfriend, Amber Hartman; grandfather, Glen Lust (Shirley Vossler); grandmother, Shirley Traxel; aunts, Gail (Marty) Eastman, Rochelle Traxel; uncle, Darcy Traxel; god parent, Elaine Erb; Amber’s mom, Rose (Tommy) Harbison; and Amber’s brother, Cody Hartman. Kirby will also be missed by a multitude of friends and extended family. Kirby was greeted in Heaven by his grandmother, Bonita (Bonnie) Lust; grandfather, Gordon Traxel; cousin, Jason Webber; godparent, Ralph Erb; and amigos, Blaine Nittel and Dallas “Hillbilly” Hillman. Kirby attended Seven Persons School from ECS to grade 9, and graduated from Eagle Butte High School in 2007 (with the help of some very special people – you know who you are!). Kirby was involved in the Seven Persons 4-H Club and Karate club in his youth. He was always involved in the farm with the animals and doing chores. He worked for several people including Bill Watson, TLC Farms, Fort MacLeod Auction, Pincher Creek area farmers, and in the oil patch at Norris Cat Services, Savana Drilling, Baron Oilfields, Tornado Projects Ltd, BYZ and at the time of his death Cactus Well Service. Kirby’s interests were hanging with his friends, helping when asked, hunting, riding and roping, and of course his passion, the rodeo and bulls; either riding or fighting them. He was excited and proud to be part of the rodeo family. Respect is earned and Kirby did just that with whomever and whatever he did. In lieu of flowers, memorial gifts in Kirby’s memory may be made at the Servus Credit Union, Member #11914512, in trust for his son, Ryder. The Funeral Service will be held at the Medicine Hat Exhibition and Stampede Grounds, Pavilion (use Field House Entrance), 2055 – 21st Avenue SE, on Thursday, November 20th, 2014 at 1:00 p.m. with Reverend Barrett Scheske officiating. Condolences may be sent through www.saamis.com or to condolences@saamis.com subject heading Kirby Lust. Radio funeral announcement can be heard on Wednesday around 11:35 a.m. on 93.7 Praise FM. Funeral arrangements are entrusted to SAAMIS MEMORIAL FUNERAL CHAPEL CREMATORIUM & RECEPTION CENTRE, \”The Chapel in the Park\”, locally owned and directed. Should you wish any additional information, please telephone (403)528-2599